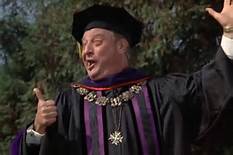 Why is it that people cannot accept what happens in their lives?  The election in the United States has certainly shown that there is a group who refuse to accept the Presidential election.  It was due process and in the past there have been many presidents who were disliked, feared, criticized and considered to be the wrong candidate.  Yet, they went on to do the job and do the best that they could.  The same is true in life.  An event occurs in a person’s life and they refuse to accept it.  They fight it rather than move forward.  It’s not always easy.  For example, a student is not accepted at their preferred college.  Rather than move on, they appeal it, try to have an alumni put in a good word, or if they are rich, give a substantial contribution so that they can be admitted and attend the school.  There was an old Rodney Dangerfield movie in which he decided he wanted to go back to college and attend it with his son.  The title was “Back to School.”  His son had a difficult time accepting it at first until his dad remodeled their dorm floor for him and his friend.  The only way Rodney was able to attend was by giving a sizable amount of money for a new building which would be named after him.  It was his only was of be admitted to the college.  As we grew into adults, there were many occasions when all we really wanted was to be accepted.  It could have been play groups, private schools, neighborhood friends, or even in high school as part of a unique or popular group.  Often there are many individuals who go out of their way to be cruel to other people and refuse to allow them to join a group, or even a team.  The same is true in the workplace.  There are men and women who intentionally snub other workmates for a variety of reasons.  Often it is jealousy as they envy the other person’s talents, good looks, warm personality or even their work ethic.  It’s really foolish as we are all working towards the same goal.  Keeping the business alive and having a pay check are what really count.  In the Good Gus Series, there was not a single story that didn’t accept anyone who was introduced as a new character.  Christmas is rapidly approaching.  Don’t fight the mall crowds.  Instead, give the best gift for a child, reading and particularly the Good Gus Series which is now available exclusively on Kindle worldwide.  If you feel that you cannot accept a person you may designate to be  in charge of your health or money in a time of crisis, take a moment and read “Misplaced Trust.” Now available on Kindle, Nook, Apple and sever other popular e-book websites.