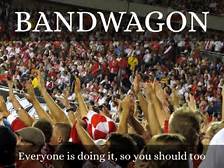 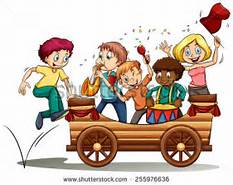 Whenever something is popular, the people who want to be part of something jump on the bandwagon. Is it a lack of confidence, or do they just want to be a part of the crowd? In any event, once it starts it’s almost like an avalanche. It can’t be stopped.  When someone falls out of favor with the media, anywhere in any country, everyone jumps on the bandwagon to criticize, condemn, etc. If a person makes a mistake, that is one thing.  However, lately, individuals are being attacked if they don’t say the correct word about almost anything.  Then everyone is on board to prove they are part of the “in crowd” in whatever action they take.  Do you remember the old saying your parents probably said to you when trying to set you straight?  “If your friend jumped off a bridge, would you?”  They were trying to make a point in that just because one person does something doesn’t mean that you should.  Maybe that’s the point.  The people who jump on the bandwagon are followers, not leaders. All the people who left President Trump’s business councils were supposedly business industry  leaders. Yet, the second there was a crisis, they all jumped ship.  I’m not saying I agree or disagree, I am simply giving an example of human behavior.  Take a look at fashions.  Is it possible to imagine that people pay exorbitant amounts of money for ripped jeans? Seriously, in earlier times if you had ripped jeans they were patched and worn until they looked like the designer jeans. However, because it is in, everyone has jumped on the bandwagon and the jean manufacturers are wealthy.  In the Good Gus series, the only bandwagon was a buckboard with musicians!  The series is available on Kindle elusively worldwide.  If you are not willing to be on or off the bandwagon, find a cozy spot in the cool shade and read “Misplaced Trust.”  It is available on 24 Symbols, Apple, Nook, Kindle, Kobo, Page Foundry, Scribd, Playster and Tolino.