Before its too Late 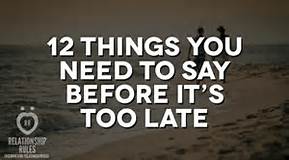 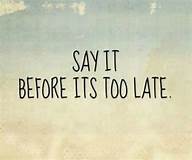 Individuals often say before its too late when they are trying to win an argument or have a serious problem.  It is also the standard phrase when families have older relatives that they have had a falling out.  Often people have arguments and then stay angry for long periods, sometimes even years.  Then, when they become sick, have a heart attack or are diagnosed with a terminal illness, suddenly everyone feels the need to resolve what should have been taken care of a long time ago.  Individuals will say fix your problems with a family member before its too late.  They don’t want the sick person to pass and have the other individual regretting it for the balance of their life.  Holding grudges are pointless.  In the old west there were countless stories about families feuding such as the Hatfields and the McCoys.  It was all stupid and led to ridiculous violence.  There was a October movie recently on the Hallmark channel about two women who let their friendship dissolve over a dispute.  Both women worked together baking and won the pumpkin bake off every year in their town.  Then, one day, one of the ladies’ father gave her money to open her own bakery.  The first friend didn’t include her friend and the feud started.  Fast forward ten years, and they each had an adult child assisting them in their separate bakeries.  One had her daughter and the other had her son who had trained at the Cordon Bleu in London.  The daughter was good with figures and numbers and had graduated from Wharton Business School.  The son wanted to expand his mother’s restaurant to offer many new foods he had developed  that were not baked goods.  The mother refused and didn’t want to expand.  Finally, the second woman fell and was in a cast and couldn’t participate in the bake off so that only left her daughter who was a terrible baker.  The woman really needed the win as her bakery was in financial trouble.  Naturally, the two adult children get together secretly and help each other.  However, the day before the bake off, the best friend to the feuding women stole the recipe from the second woman’s bakery.  She announced on television that she was baking the exact recipe the daughter had planned to make at the bake off contest.  The adult children become so upset that they decide it was time to end their mothers’ feud.  They went to the second mother first and told her that before its too late they needed a plan.  The mother hesitated and finally agreed and then the three of them went to the first mother’s home.  She was reluctant, but as her son pointed out, if they didn’t end their fight, the thief would win.  In the end, they joined forces and developed a new recipe.  At the bake off the daughter saw the tablet the thief was using and realized she had photographed her handwritten recipe.  Of course, the thief was disqualified.  The families joined forces and opened one restaurant encompassing everybody’s talents. In the Good Gus Series, better late than never is not actually a phrase used in any of the stories, but the principle is applied in many of the books.  (books available exclusively on Kindle worldwide.)  Before its too late, read “Misplaced Trust”  as it can be a great read for anyone on your Christmas list. (book available on all popular e-book websites)