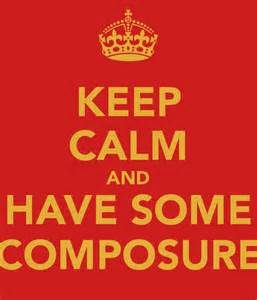 When an event occurs that is possibly difficult, disturbing, or just plain annoying, many people lose their composure.  Rather than “keep their cool” they lose their tempers, say nasty words, destroy property or worse.  It is important for individuals to learn how to keep their composure.  For example, many people fall apart when they are having a dinner party if everything doesn’t go according to plan.  Any number of things could occur.  At the last minute you could have a plumbing problem, the electric or gas might go off on your stove or oven, you discover at the last minute that one of yur dinner guests has an allergy, or you lose power due to a storm when you are halfway into the party.  When I was in the contract business a long time ago, it was decided that I should host a dinner party for several of the clients.  Fortunately, at the time had had a home with two fireplaces.  I chose finger foods as they were easy to prepare and convenient.  I set up a menu with several servings of a variety of foods.  After the party was in full swing, the transformer on the street suddenly blew.  We had no electricity therefore no lights or cooking.  Rather than call it quits, I fired up the grill, lit candles and started the fireplace.  Everyone had a splendid time and the new business from these clients was completely worth the effort.  Not to mention, they had a unique story to tell their friends and co-workers.  It isn’t often that people in the public eye lose their composure.  They don’t want the newspapers, news, magazines, etc. to write anything that might tarnish their reputation.  However, many celebrities over the years have lost their composure and have regretted it.  After the media had a field day with the unfortunate display, they generally were no longer popular and lost their income.  Often it is difficult to remain calm  in the workplace and composed when the individuals around you act foolishly, are lazy, gossip, don’t finish the work you are expecting from them and a great deal more.  Rather than lose your temper or say anything that may jeopardize your position, it is far better to find a new position with better working conditions.  In the Good Gus Series, Sheriff Gus never looses his composure.  Through many adventures and what appear to be perilous weather events, he remained calm and his answer was always the importance and value of knowledge and reading.  The series is exclusively available on Kindle worldwide.  If dealing with family or friends during a difficult period, rather than lose your composure read “Misplaced Trust” which is also available on Kindle, Nook, Apple and several popular e-book websites.