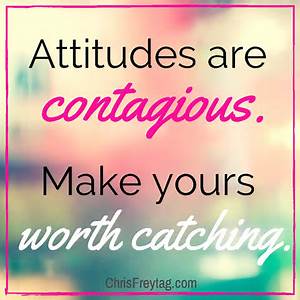 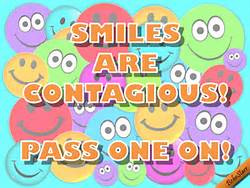 There are a few things in life that are contagious such as sickness, yawns, and even smiles. When an individual is ill, they often go to work and contaminate everyone else.  Even though they know it is wrong and possibly have paid sick time, they do it anyways.  Before you know it, the staff is sick and the smart people stay home until they are well again.  The contagious person seems to feel that they need to make a point that they will be in the workplace regardless of their health.  They may also be afraid that another co-worker will do their job and perform it in a more cost effective manner, thereby eliminating their slot.  Either way, it is a lack of consideration for the others in the company.  What is worse is that anyone of the individuals working may have a child with an autoimmune disease which could cause serious problems.  That particular individual could lose days from work, possible income, and end up paying medical costs.  Audrey Hepburn said that there were two types of people in the world; those with consideration and those without.  She was clearly correct.  Often individual’s actions lead to other consequences for innocent people.  In my friend’s office, more than once she has told her employer who came in sick, to go home and recover.  He felt it was necessary to be there, yet he didn’t accomplish anything except spread his germs and make her ill along with her father-in-law.  Sometimes individuals’ expressions become contagious.  For example, a person may be watching a sad movie and a character begins to look very unhappy.  If you observe the individual you will frequently see them with the same expression of their face.  Smiles are very contagious and should always be passed on as frequently as possible to everyone you meet and deal with on a daily basis.  Sometimes a person can be having a really rough day and your warm smile can turn it around for them even if only for a few minutes.  Many people believe that if a person has a handicap they may catch it.  It is more in the thoughts of ignorant adults as opposed to children.  When Katie is introduced in the Good Gus Series, book twenty-two, “The Field Trip,” the children at the school stare at her and wonder about her.  The story does not imply that they will catch anything from her.  However, that is what most children think unless they have been taught otherwise.  There are five books available exclusively on Kindle worldwide.  Once family members begin fighting it becomes contagious.  Don’t let it affect you.  Instead read “Misplaced Trust’ which is also available on Kindle, Nook, Apple and several other e-book websites.