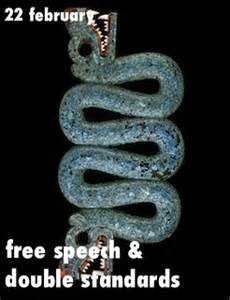 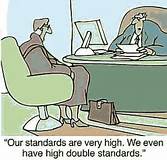 Wherever you go there seems to be a double standard. Why?  There is a great deal of discussion in the news, on the internet and in books about everyone being treated equally and fairly.  Yet real life differs greatly.  Both men and women are treated poorly depending upon where they live and their circumstances.  The U.S. history includes slavery.  Yet, there were other countries in history whose residents were slaves, the Irish for example.  Today though, there are different forms and primarily it is in the workplace.  In many countries, large manufacturing firms employ individuals below that country’s minimum wage.  They in turn, mass produce the products and then sell them at huge profits.  In fact, these companies have a double standard as they do not care about the people barely earning a living because all they are interested in is their bottom line profit.  The school systems in numerous countries also appear to have a double standard.  They confiscate lunches and allow the children to go hungry if they refuse to eat the school menu.  The school  meals don’t even fall within the appropriate nutritional value if you were to believe what these teachers are claiming while they steal the student’s lunches.  For example, most parents pack a healthy lunch including fruit and design the foods specially for their child and if they have any allergies.  But, as Jaime Oliver proved on his TV specials in the U.S., the school lunches were not only appalling but have literally no real nutritional value.  An example of a menu in one school include sausages and mash, cake and custard, sandwiches, doughnuts, etc.  I recently saw a few comments on this subject and the mums were livid because their children were being shamed in eating an avocado.  That is seriously a cause for an uproar and a clear case of the double standard.  Do you really think the teachers eat that food?  I doubt it.  Speaking of the double standard and schools, many have always allowed the star athletes to skip classes, cheat on exams, and in general do as they pleased so that the school teams would win.  There have been countless movies on this very topic.  If you feel people in your life have a double standard towards you, I urge you to discuss it with them.  We all need to be treated fairly and allow us our pride and dignity.  In the Good Gus series there wasn’t a double standard.  Everyone worked together, men, women and children at whatever tasks came along.  The books are available exclusively on Kindle worldwide.  If you are being treated unfairly while you handle a trust, will, estate or finances, don’t allow that double standard thinking to get in your way.  Instead, learn a few ideas by reading “Misplaced Trust” which is available on 24 Symbols, Apple, Nook, Kindle, Kobo, Page Foundry, Scribd and Tolino.  In three weeks I will be appearing at the Cotuit Library, Massachusetts.  The morning will be reading the Good Gus books to the children.  The afternoon session will feature self publishing tips, becoming a writer and so much more.  Hope to see you there!