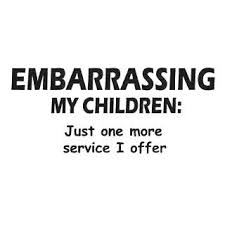 Many people embarrass easily.  Sometimes it doesn’t take much such as a backhanded insult, a direct comment or a situation.  There are individuals who go out of their way to embarrass others.  In high school, in some circles, it is considered mandatory.  It is almost a form of bullying without being obvious.  Yet, these teens who one can assume, feel inferior to everyone else, go out of their way to embarrass a classmate to make themselves feel better.  The end result doesn’t last long unless they have a group of friends who need to feel superior towards others.  Deep down inside, they must feel that it is wrong because if they thought about it, they wouldn’t like it happening to them.  Adults are no different.  It is possible that they were bullied and embarrassed as youths and were so hurt by it, that rather than recognize it was wrong, their approach is revenge.  Still bad, yet it takes another bully who will embarrass them so badly that they will see the errors of their ways.  A low self esteem may be the answer as to why one person will embarrass another so they feel better about themselves.  Even when this type of behavior is pointed out to them, they often ignore it rather than take a look and see why they feel the way that they do.  It’s not rocket science, just logical.  In the movie “Legally Blonde,” the character Vivian Kensington, played by Selma Blair, invited Elle Woods, played by Reese Witherspoon, to a party telling her it was a costume get-together.  It was simply a party but she did it to embarrass Elle.  It was cruel and unkind but Elle handled it gracefully.  She didn’t hold a grudge and realized that she was far and away a prettier girl, who had style, grace and class.  Elle had strong self confidence which showed in the movie.  In the Good Gus series, the only person that is embarrassed is Bad Bart after he bullied Bob at the Sweet Shop and a few of the town’s folks.  If you feel you might embarrass yourself while handling your family’s will, estate or trust, don’t feel that way.  Read “Misplaced Trust” which is available on Kindle, Nook, Apple and several popular e-book websites.