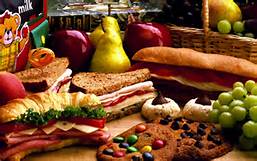 Everyone has beliefs about food myths.  For example, the next time you drop a piece of food on the floor,  you may want reconsider the five second rule before you put it in your mouth.  According to Rutgers University it is unsafe.  However, “food retrieved just a few seconds after being dropped is less likely to contain bacteria than if it is left for longer periods of time, researchers at Aston University’s School of Life and Health Sciences in England recently reported. The Aston team also noted that the type of surface on which the food has been dropped has an effect, with bacteria least likely to transfer from carpeted surfaces. Bacteria is much more likely to linger if moist foods make contact for more than five seconds with wood laminate or tiled surfaces.” So basically it’s a judgment call.  Negative calorie foods is another one of the food myths.  Many people, particularly, dieters, believe that fibrous foods such as celery, apples, lettuce and cucumbers have no calories but are actually reducing your caloric intake.  Sadly, negative-calorie food does not exist.  The foods do contain fewer calories but still require energy to digest.  According to the Mayo clinic, this is just another of many food myths.  Eggs are another example of food myths.  They do contain a substantial amount of cholesterol in their yolks. It is also true that cholesterol is the fatty substance in our blood that contributes to clogged arteries and heart attacks. However, stating that they are “bad for your heart” is incorrect according to the experts.  “Epidemiologic studies show that most healthy people can eat an egg a day without problems,” says Penny Kris-Etherton, Ph.D., R.D., distinguished professor of nutrition at Penn State University.  It is important to point out that one egg a day is not the same as a three egg omelette or scrambled eggs with that amount of eggs.  Another example is that carbohydrates make you fat.  They absolutely do if you eat all sugary types of foods such as white bread, pasta and doughnuts.  These types of foods can raise your risk of developing health problems such as heart disease and Type II Diabetes. However if you cut off  so-called “good-carb” foods, such as whole grains, beans, fruits and vegetables, you end up losing a main source of fuel as well as vital nutrients and fiber. For many people, a low-carb diet may be more difficult to stay on as a dietary program. There’s nothing truly fattening about carbohydrates, according to Jean Harvey-Berino, Ph.D., R.D., chair of the department of nutrition and food sciences at the University of Vermont and co-author of The Eating Well Diet (Countryman, 2007). These are just a few examples of food myths.  In the Good Gus Series, none of these ideas or research existed.  The books are available exclusively on Kindle worldwide.  If you are thinking about the food myths presented while handling a trust or estate, take a break and read “Misplaced Trust” which is available on Kindle, Nook, Apple, and several popular e-book websites.