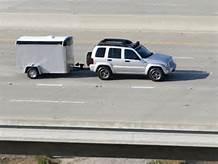 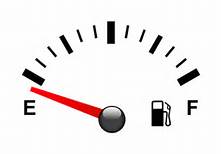 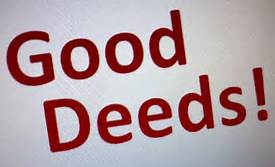 Yesterday, my daughter, granddaughter and I were the recipients of a good deed. My daughter had a car she owned recently returned to her. After a few minor repairs, it appeared to be in good condition. However, there was one problem that was not checked.  As we progressed through our day, at the commuter rush hour time the car completely stopped on a busy street.  To make matters worse, she had a rental trailer attached.  Then, it occurred to her.  The gas gauge was wrong.  She had put petrol in the tank earlier in the day so when it stopped, running out of fuel was her last thought.  The worse part of all this was that it was extremely hot.  It was 107 Fahrenheit or 42 Celsius.  My granddaughter, who is a toddler was hot and thirsty and began to cry.  The refueling station was so close that my daughter left us in the car while she walked to the station.  By the time she returned, the baby was crying, my arm was getting tired of waving cars by and the worst part was that they didn’t have a container to give her enough gas to make it to their station.  At least a couple of hundred people drove by and didn’t even ask if we needed help.  As we prepared to leave the vehicle with the trailer, remove the car seat, a man pulled up in front of us and asked if we needed help.  I explained the situation and his reply was, “I will give you a tow.  It’s not that far to the gas station.”I asked if he was sure because of the trailer and he said no problem.  We put the car seat back in and jumped into the vehicle.  The oncoming traffic was not that cooperative.  It took a few minutes and since I was in the passenger seat I held my arm out to try to get the traffic to stop while he moved over three lanes.  When we reached the station, it only had four pumps and two were out of order. He finally pulled our vehicle forward and then reached over the other side to stretch the pump.  This will amaze you.  He not only pumped the gas but paid for it as well.  My daughter asked him for a card or if there was something we could do to thank him.  His reply was, “The next time you see a Mormon, say thank you.” It is rare that anyone is the recipient of a good deed, but yesterday was definitely our day.  So, thank you whoever you were.  In the Good Gus series many of the stories will inspire the young reader as a good deed is woven into the fabric of the stories.  The series is available exclusively on Kindle worldwide.  If you appreciated this good deed, please pass it on.  Hopefully, reading “Misplaced Trust” will inspire you to let another person know about the book particularly if they are in need of assistance with a will, trust or an estate.  It is available on 24 Symbols, Apple, Nook, Kindle, Kobo, Page Foundry, Scribd, Playster and Tolino.