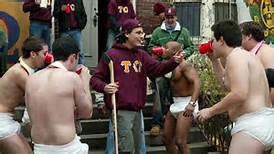 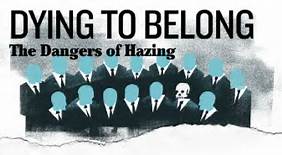 It appears that hazing is on the rise again. The news has new articles about it in the eastern section of the United States.  What is curious is that it is the end of the basic school year yet it continues to occur.  One article pointed out that calls to the emergency line went unanswered when the unfortunate victim of hazing at a fraternity had fallen down a flight of stairs which had rendered him unconscious.  One of the frat members begged the others to help him saying he needed to go to the hospital.  Yet, the other young men were only concerned about themselves and protecting themselves from being accused of hazing which is a crime.  Apparently, they forced the victim to drink large amounts of alcohol and beer.  His blood alcohol level was quite high.  In another state, the hazing included inappropriate physical harm.  However, no one is being charged as they are all members of sports teams.  When a teen wishes to go away to college, they really need to be prepared for the pressures.  Not only are there issues with being on their own for the first time without any supervision, but they also become responsible for all their decisions and actions.  Bad choices can lead to the hazings mentioned above.  No one ever thinks that anything will happen to their child, yet, the pressure to be part of a group, club or fraternity is overwhelming.  Some teens can’t handle it and become easy targets for the hazing crowd.  They are the types of individuals who enjoy hurting others, lauding over them, and the power that goes with it.  It is a topic that many parents discuss yet they aren’t there twenty-four seven. One suggestion for parents is to tell their children they can ring anytime day or night.   Hazing is really just another form of bullying.  It started in the colleges years ago and it has progressed into the unfortunate deaths for many students that should still be alive today.  In the Good Gus Series there was no college and since the stories are about children, it was never a topic.  Bullying, however, was in book one, “(Pecos Meets Bad Bart.”) The series are available exclusively on Kindle worldwide.  If you think a friend or family member might be considering a fraternity and are worried about hazing, take a moment to let them know your thoughts.  The popularity of “Misplaced Trust” is growing and can be found on 24 Symbols, Apple, Nook, Kindle, Kobo, Page Foundry, Scribd and Tolino.  The final plans for my appearance at the Cotuit Library were formed today.  Remember it is Saturday, May 13 at 10:30 a.m. for the children and 1:30 p.m. for future writers.