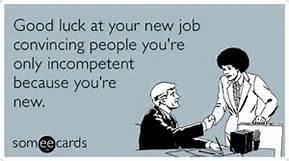 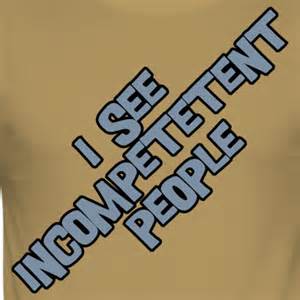 How many people do you meet on a daily who are completely incompetent?  The number of people in the world being paid for jobs that they are seriously  incompetent in performing is staggering.  It occurs everyday no matter where you go.  For example, you may bank at a named bank that has several branches.  Yet one bank will have one type of deposit slip and another of that same company will have something completely different.  If you bring in the slip that you believe is a standard slip, then they refuse to accept it, you literally have to stand there and fill out a new one.  That shows a serious lack of efficiency with no standards for their basic bank forms.  There are many companies that don’t have the exact forms for various issues even though they are branches of a main firm.  Anyone in charge of large corporations such as banks, who do business globally, should have standardized forms for everything.  Another example is a friend of mine who submitted a form for a bank account as the person who opened the account had passed.  My friend is the trustee on the woman’s trust and therefore, should have been able to collect the funds.  However, she submitted the form three times and the last time had it completely retyped by a paralegal and it was still rejected.  Finally, a bank employee told her that the woman had another account.  Why didn’t the bank give her that data rather than keep telling her the form was rejected?  It has been over one year and she still has not been able to collect the money and close the accounts.  The worst part in all this is that she had no idea about the second bank account and the bank refused to give her the number so she can  redo the form a fourth time and finally close out the late person’s trust.  It’s not only about banks, but anyone who has taken a driving test in any country really  doesn’t appreciates the lack of ability and the incompetent staff.  Often well qualified drivers are rejected due to the failure of the driving inspector to understand the rules of the road.  It sounds crazy but I know a few people who failed who never should have as they were well qualified and excellent drivers.  There were no incompetent people in the Good Gus Series.  It would have been a poor example to young readers.  Many of the stories in “Misplaced Trust” include incompetent individuals who still manage to succeed in lying, cheating and stealing only to never be prosecuted.  Greed is a powerful tool.  (books available on all popular e-book websites)