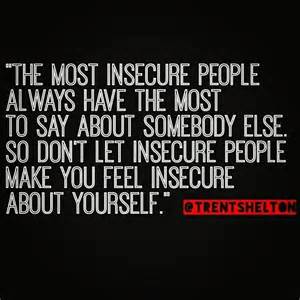 Many people are insecure. It may be because of their looks, their attire, their job, or even their relationships with family, partner or friends.  Often people may start out with a great deal of confidence, but become insecure.  It could happen as early as childhood.  With all the pressure to wear the “in” clothes, have the brand name backpacks, attend the “right school” or even as early as elementary school either have the popular lunchbox or be able to purchase lunch on a daily basis.  Many schools recognizing the apparel issue, initiated a program whereby the students had to wear uniforms.  That only left the backpack, shoes, and lunch issues.  There are schools that give free lunches to the children whose families cannot afford it.  To solve that problem so that the charity cases wouldn’t be recognized, they issued lunch cards so that no one could tell the difference.  The shoes, which sounds ridiculous, was another matter.  There were times when famous sports figures endorsed shoes that were extremely expensive  that one pair was equal to a week’s plus worth of groceries.  They were so popular, that if a child or teen didn’t have a pair they were ridiculed.  There were also students who literally stole the shoes.  It is a terrible way to go through life in one’s formative years.  It is, in reality, a different type of bullying.  Yet, it led to many individuals feeling totally insecure about their wardrobes.  Even hairdos have cycles of popularity.  However, once again, it leads to additional insecurity about one’s looks.  For example, if a person cannot afford an upscale barber cut or salon styling, purchasing a haircut from an average discount shop, they can easily be made fun of and addition add to feelings of being insecure.  There are other forms of being made to feel insecure such as in a relationship where one person manipulates, controls, and makes the other individual feel worthless, and wonder about everything about themselves.  Once a person leaves that type of toxic relationship, it takes time for them to return to even feeling partly good about themselves.  In the Good Gus Series, other than Bad Bart, no one is insecure about who they are and how they feel.  The series is available exclusively on Kindle worldwide.  If you are feeling insecure about handling the finances of a close relative or friend, please consider reading “Misplaced Trust” and it will change your mind.  It is available on Kindle, Nook, Apple and several popular e-book websites.