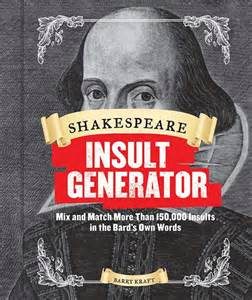 There are individuals who are insulting in many small ways. For example,the fashion world seems to think that ripped jeans, paint splatter pants, clothes that don’t fit properly are perfectly acceptable.  However, if they had ever been poor and actually had to wear other people’s clothes and shoes that didn’t fit correctly, ripped jeans because they were truly worn, or even paint stained pants, I doubt that it would be the in fashion.  It is insulting to the people who are in those situations.  Insulting remarks often come easy to various individuals.  They think nothing of making a remark that is possibly rude or even condescending.  Yet, if the reverse were to happen to them, they become angry, possibly lose their temper and say many unsuitable words and phrases.  A friend of mine who works in a legal office, called a client to see if they were keeping their documents up to date.  The client’s response was, “I was wondering when you were going to call.  He’s been dead for four years.”  Seriously, what was this woman thinking?  How could she be so insulting to my friend?  Everyone who owns a business generally has many customers.  They try to keep in touch and check to see if they are needing anything.  Yet, many small businesses have a fair amount of customers and cannot keep track of every single person.  When she told me, I replied, “Did she think you scoured the obituaries in the newspapers?  Who has time for that?  On top of which, my friend is in California, which has a huge population and how would she even begin to know if she actually spent all of her free time reading the columns if the person was even a client?  An old friend was visiting me recently and he told me a story.  My friend is eighty years old and just recently stopped driving over the road, eighteen wheeler trucks back and forth across the United States.  Anyway, when his mother was alive he would frequently take her out to dinner when he returned from a road trip.  She had wanted to see one of the grandchildren so he stopped to collect her.  She appeared in an extremely skimpy outfit.  He told her either change or she couldn’t go to dinner.  She felt he was insulting her about her appearance.  He said, “No, it is an insult to me, your grandfather and your great grandmother.” Naturally, she changed to a more appropriate outfit.  On the old show, “Happy Days,” the Fonz told Joanie one time, that when you appear in an outfit, you are advertising and so he wanted her to be careful about how she basically advertised as to the type of girl she really was.  In the Good Gus Series, no one is really insulting, not even Bad Bart in book one, “Pecos Meets Bad Bart.”  Now is the time to start your Christmas lists for the young children in your life.  (Books available on the website in paper form and e-book on Kindle) If people are insulting your taste in reading, tell them to read “Misplaced Trust.”  It will open their eyes to your good taste. (books available on all popular e-book websites.)