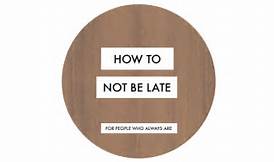 Why is that whenever you are waiting for someone and expect them to be on time,  they are always late? It’s not about being late if there is a legitimate reason. It is generally because they didn’t leave on time.  There are a lot of locations around the world where the traffic is extremely heavy at rush hour or in some instances such as California, all the time.  Many individuals have to make allowances to arrive at work on time because of the traffic.  They often leave two hours earlier in the morning so they won’t be late.  If you had parents who were always late, they set the example for you.  They were probably poorly organized, stayed up too late and simply couldn’t awake to their alarms.  They are also the type of people who  probably set their clocks  five to ten minutes ahead and they were still always late.  I had that type of family and it took years to teach myself to be on time.  Going to school wasn’t a problem as I took the bus.  However, the children that walked had difficulty if they had tardy parents.  The unfortunate part of being late to school was either demerits or detention.  As adults being on time for work became imperative and yet there were still people we worked with who were consistently late.  Depending upon the work environment, they were reprimanded and eventually let go or the boss liked them so it didn’t matter.  In the Good Gus series the small schoolhouse with the teacher, Miss Patty, knew all of the students and they either walked or rode their horses to school everyday so there were no worries about being late.  The series is available exclusively on Kindle worldwide.  If you are always late, find a few friends who are on time and ask for their help.  Remember, this week-end, “Misplaced Trust” is available for reading at 24 Symbols, Apple, Nook, Kindle, Kobo, Page Foundry, Scribd, Playster and Tolino.