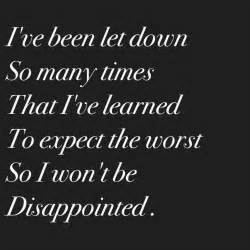 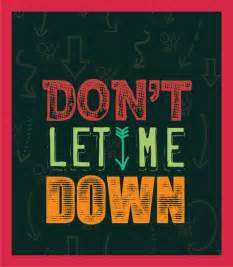 When we are let down by family, friends and workmates in a time of need it is a shock.  We always think that we can count on certain people and yet they manage to let us down when we really need it.  Recently there was an article about a single mother who became stranded in a parking lot.  One of her children had left the lights on and her battery was dead.  Being let down by strangers when she asked for help was a surprise.  The one person who did help her was a seventy four year old man.  Not only did he call a tow truck but he also called his wife who gave the family a ride home.  Obviously, this man was not accustomed to being let down as he assisted this girl and her family.  What was even more of a surprise was that he sent a mechanic to her home  the next day and paid for the repairs she needed.  He went beyond being a good Samaritan.  He and his wife were people who were kind, considerate, and willing to help a stranger and her children in need.  Sometimes in life, when things go wrong or become difficult, if you ask family or friends for help, that’s when you learn who people really are as individuals.  If they give reasons and excuses, then you automatically should assume that they will be a let down to you when you are in need. It’s a bit of a shock particularly if they have been your friends for a long time.  If it is your family, it is much worse.  They are the individuals that you expect you can rely on.  You can call it being selfish, one way, or possibly face the fact that they don’t really like you.  Jealousy could also be a factor as they want you to fail.  You can also be let down by a person you are dating or in a marriage.  If they try to be kind while telling you that the relationship is finished, it still hurts.  It’s just not easy.  In the Good Gus Series, Sheriff Gus was a man whom the citizens could rely upon.  Let down was not in his nature or vocabulary.  The series is available exclusively on Kindle worldwide.  If you have been let down by family, friends or workmates, don’t let it eat you alive.  Stop and consider reading “Misplaced Trust” to help you get a handle on your situation.  The book is available on 24 Symbols, Apple, Nook, Kindle, Kobo, Page Foundry, Scribd and Tolino.