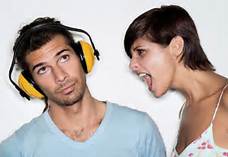 Many people are quite loud.  It’s not just about having hearing issues.  They are generally very loud in their speech and often their actions.  There are individuals who live in loud homes.  There is even a children’s program on Nickelodeon entitled “The Loud House.”  It’s about a family that has all girls and one boy. He has ten sisters! It’s a cute show for the children.  Often people speaking to individuals who do not understand their native language end up raising their voices.  It doesn’t seem to penetrate their brains that speaking in a louder tone is going to help them understand.  As children, many of  us were noisy and boisterous.  As we matured, that subdued.  Now, however, if a person cannot get their point across they raise their voice.  That only escalates into an argument or a fight.  It often occurs in bars when people are drinking.  Two people start out speaking normally and having a good conversation.  Then, the more they drink, the   more they began to voice their opinions.  If they are different from their companion, the fur flies.  There is the other side of the coin in which there are people who complain if a person is too quiet.  They make remarks as to why they aren’t speaking.  They try to get into their heads and before you know it, the quiet person either loses it or walks away.  It’s almost a form of harassment because they aren’t speaking, as they may not be in the mood to do so, or they had a bad day and don’t want to talk.  In the Good Gus series the children were occasionally loud.  The series is available on Kindle worldwide.  If everyone in your home is too loud, find a quiet nook and take a chance on reading “Misplaced Trust.” It is available on 24 Symbols, Apple, Nook, Kindle, Kobo, Page Foundry, Scribd and Tolino.