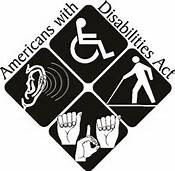 Recently my son told me about a few new laws in the United States. They involve untrained service dogs. Over the past several days he has been to two different grocery stores,  In both stores there were a variety of people with their dogs.  They dogs were out of control, licking produce and knocking items down off the shelves and in produce.  They were large dogs such as a German Shepard, Pitt Bull, Dalmatian and a Rottweiler. None of these dogs had been trained as service dogs.  In order to become a service dog it takes quite a bit of work for the dog. They are required to have a minimum of one hundred twenty hours of schooling, with at least thirty hours in public behaving in an unobtrusive way.  The requirements the dogs have to meet are quite stringent, yet the dogs in the groceries were out of control, unruly, and in some cases threatening.  The new laws allow individuals to have dogs and claim they are service dogs under the American Disabilities Act.  They are for psychiatric issues and emotional support.  What is sad is that individuals who are physically disabled must have the trained service dogs and the cost is extremely high.  These new laws people claim mental or emotional issues and now bring their untrained dogs wherever they choose.  In addition, the dogs trained for the military are also extremely stringent yet they are not allowed in public places.  It is understandable that individuals need help, yet in one of the groceries, a twelve year old girl’s Rottweiler was running out of control throughout the store and she could not control him or her.There are also many new laws in other countries about where individuals may smoke.  Most hotels globally no longer allow smoking within the entire structure and for at least a short distance from their entrance and exit.  The new laws went into effect several years ago, but the positive for the hotels were several things.  They no longer had to scrub rooms to remove the residue of smoke, their insurance premiums reduced, and they attracted more customers.  In the Good Gus Series there were new laws as Sheriff Gus and Judge Ross were the legal entities within the area.  There were statewide laws that the Sheriff had to enforce. (books available exclusively on Kindle worldwide.) Many of the new laws are mentioned in “Misplaced Trust.” (available on popular e-book websites)