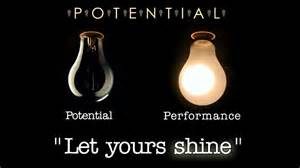 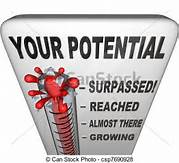 We all have unlimited potential, it just depends upon how we utilize it. There are individuals who have lost out because of recessions who were qualified for careers that disappeared.  Often individuals attend college, earn a degree, then cannot locate a suitable position.  Sometimes it takes a great deal of effort.  Occasionally, they decide it is hopeless and work at mundane jobs and are miserable their entire lives.  In the 1980’s, there were countless people with degrees who worked on assembly lines simply because the economy required specific products and the pay was significantly higher.  Some of those former assemblers went back to school and studied for new careers.  A few of the people willing to learn computer aided design moved on as the technology was booming.  Others moved into software engineering and many decided working for the government was a safer bet and became certified as teachers.  They all knew they had potential.  It just took a little time to figure it out.  Many parents send their children to the vocational schools or community colleges in hopes that they will figure out what they want to do in life.  Not everyone knows by the time they are teenagers which path to take.  How often have you heard this sentence.  “You have so much potential if only you would apply yourself.”  As young adults we heard it frequently.  Sometimes you have to try a few things to figure out what you want.  My late girlfriend had no idea what she wanted to do when we graduated high school.  She worked as a waitress and then decided she might try working in a hospital to see if she liked it.  Once she realized it was her ideal career, she went to school and became a licensed practical nurse.  As she progressed, she began to understand that she wanted to be in the operating room or the emergency room which required additional training.  Once again, she went back to school for her bachelors degree.  She was very happy until she was diagnosed with cancer.  So parents, if you children keep trying new things, let them.  They are just trying to find their way in life rather than be stuck in a boring job.  They do have the potential, they just have to find it.  In the Good Gus series, it was evident in every story that the children and adults had potential.  The series is available on Kindle exclusively worldwide.  If you feel you are wasting your potential, after a visit to the library to study careers, take a break and read “Misplaced Trust.”  Who knows you may decide being an attorney is your choice!  The book is available on 24 Symbols, Apple, Nook, Kindle, Kobo, Page Foundry, Scribd, Playster and Tolino.