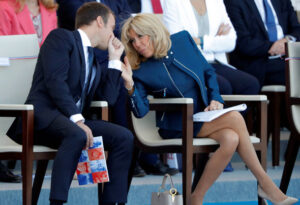 In all of the difficult times than many countries are having why is it considered a scandal if the first lady of any country doesn’t wear a fashion that the gossip mongers feel is correct? When President Trump and First Lady Melina went to Houston to see the ruination of Hurricane Harvey, the media went crazy over the fact that she wore high heels.  However, when I saw pictures of the couple touring the devastation it appeared she was wearing flats or boat shoes.  What was most important were the people who lost their lives, homes, jobs, etc.  Every time you blink, the internet has new complaints that they consider a scandal when it’s really just petty.  There have been constant articles about the President and First Lady of France.  Seriously, do these people have so little in their lives?  Why don’t they write about the important issues?  Instead, many articles are about one defamation or another and not about the real issues of the day and of the world.  On top of which, so much news now is a lie or fake how can we begin to find the truth or what is really happening.  If it wasn’t for real people, posting real articles from their phones, we would never really know what is occurring.  There is a show on Netflix entitled “Scandal” which may shed some light on what the pseudo world feels is a scandal.  Every time a celebrity blinks, it is considered a scandal.  It’s all overblown and out of proportion.  If people live vicariously through all this supposed scandal, then they need to reexamine their lives.  In the Good Gus series there was never a scandal.  The series is available on Kindle exclusively worldwide.  If you feel your friends think every little thing is a scandal, consider expanding your social circle.  If you want to know what people are really like, consider reading “Misplaced Trust” which is available on 24 Symbols, Apple, Nook, Kindle, Kobo, Page Foundry, Scribd, Playster and Tolino.