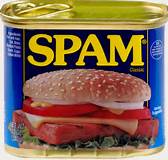 Spam is a meat product that gained popularity in the United States during World War II.  It was introduced in 1937 by the Hormel Foods Corporation.  By 2003 it was being sold in over one hundred countries.  It is basically a pork product.  In 2007 Hormel had sold seven billion cans of spam.  In the 1970’s, Monty Python performed a skit about the horrible taste of spam which eventually led to the term being applicable to unwanted, unsolicited emails.  What is troublesome is that the comments section of the Good Gus Series has become filled with spam.  If you don’t like a site say so.  However, what is happening is that individuals with a variety of unprofessional companies are commenting trying to sell their products on the space.  It is not only rude, but many of the products sold are not even remotely what anyone reading either the Good Gus series or “Misplaced Trust” would be interested it.  Why is that people think that they can just take over a comments section and fill it with their adverts?  What they really need to do, is promote their products to the appropriate markets.  We all receive spam in our emails every day.  The easiest way to clean it up is to delete all of it.  Sometimes, though, if you forget, the numbers can really escalate.  There were many ads that were not in English and I wondered if it was possible that unscrupulous individuals were using the site to contact other people of the same ilk.  Clearly, translations are available on the site, just not in the comments section.  For  those individuals who feel that they have the right to take over someone else’s site, kindly stop.  It is unprofessional, uncalled for, and downright indecent.  The point of the Gus series is good morals and values, not what these people are posting.  Obviously, during the time frame of the Good Gus Series there was no internet, let alone phones.   The series is available exclusively on Kindle worldwide. If the spam is overwhelming you as you search for data on how to solve a problem with a will or estate, consider reading “Misplaced Trust.”  It is available on 24 Symbols, Apple, Nook, Kindle, Kobo, Page Foundry, Scribd and Tolino.