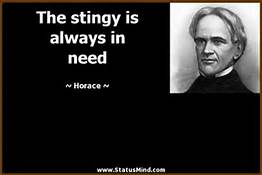 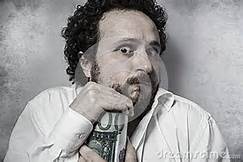 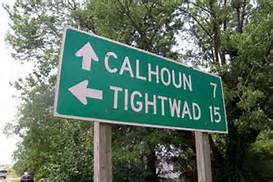 There are many words to define a stingy person such as cheap, frugal, tightwad, etc. Yet, this type of person can be really annoying in everyday life. My late father-in-law once played golf with a man who was so cheap that he almost gave up the game.  This man went beyond cheap to stingy.  He was a business associate of his son’s and the man went out of his way to avoid paying, tipping or even contributing anything in the way of money.  There are employers who tend to be that way as well.  I know a man who is a multimillionaire.  Yet, he doesn’t really pay his staff.  He has a contract with a small firm for basic clerical services in return for the business they provide him.  However,  he goes beyond that on a daily basis.  When any holiday rolls around he never gives a gift and rarely does anything extra for his staff.  They go out of their way to make sure he is protected legally as he has a professional license.  He uses the administrative aide for his personal business and dealings which was not part of his service contract.  Now, because he appears to be spending so much money on himself, he is demanding money from the service contractor to handle his overspending.  He recently had lavish dinners at an extremely expensive restaurant that could have easily given his aide a nice little bonus and helped her in a positive financial way.  However, he appears to be stingy in almost everything except when he is dealing with other wealthy individuals or clients.  Then, he will do the work for practically nothing just to impress them.  Being a cheapo may stem from early childhood for many people.  Waiters and waitresses know all too well just how stingy a person can be even if the server did an excellent job and the customer appreciated it.  My late aunt tipped everyone  as anyone who has read my blogs knows.  Yet, she always had good service and when she moved into an apartment building, she was always taken care of first.  I do not live in an apartment, but I am following her tradition.  There may have been individuals during the Good Gus era that were stingy, but not in the series.  The books were written to give children a positive perspective about life then and translate into their lives today.  The series is available exclusively on Kindle worldwide.  If the relatives or family members you are assisting are being stingy towards you, take heart and read “Misplaced Trust.”  It will guide you in a way to help you receive the compensation you deserve.  The books are available on 24 Symbols, Apple, Nook, Kindle, Kobo, Page Foundry, Scribd and Tolino.