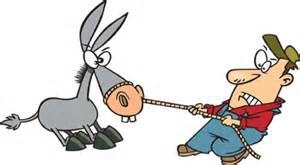 There are many people and countries because of pride do foolish things and become stubborn. It is a personality trait that is not always the best. As constantly as history repeats itself, so do acts of people and countries occur because they are stubborn.  Take people for example, they act certain ways to obtain whatever it is they want.  If they can’t receive it, they dig in their heels and become unreasonable.  There was a man I knew who was just that way.  When he was told his father was dying, even though he was making plenty of money, he insisted that his mother pay for a flight for him to visit his father before it was too late.  He was obstinate about it that when she finally agreed and paid for the tickets, it was too late.  His father died while he was in route.  What is worse is that once he arrived he and his mother began fighting.  All because of being stubborn.  Look at the political scene in the United States.  The politics is constantly in the news.  Both sides are standing firm and are stubborn about what they want and what they feel is right.  Getting together and solving the problems doesn’t seem to be an answer anyone is willing to choose.  Just today, there were two different people I am acquainted with who are so set in their ways, they are always right in their minds and just plain stubborn that they have left their homes and are living in their cars.  Seriously, their families are upset, yet they are making choices that are affecting them and all because they are too stubborn to meet the problem half way and find a solution.  The old saying, “Stubborn as a Mule” is obviously still applicable today.  Mules would refuse to move and often sit down when their owners were trying to cross a terrain or even work a field on a farm.  The only stubborn person in the Good Gus Series was Bad Bart.  Eventually, however, Sheriff Gus showed him that there were better ways to approach life and situations.  There series is available exclusively on Kindle worldwide.  If family members are being stubborn while you are trying to resolve a will or trust issue, before resorting to court, take a few moments to read “Misplaced Trust.”  You could learn of the many ways you  can handle those difficult situations.  The books are available on 24 Symbols, Apple, Nook, Kindle, Kobo, Page Foundry, Scribd and Tolino.