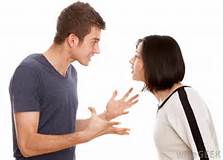 Yesterday, for the first time, I heard the words tone policing.  “Tone policing focuses on the emotion behind a message rather than the message itself – and you might think you’re helping by making the conversation more “comfortable.” This is a direct quote from an article on the internet regarding feminism by Robert Hugs.  People now have  a name for a way of quietly bullying individuals in an argument or discussion.  He refers to it as protecting privilege.  I am not sure I understand his idea of privilege.  He wrote a cartoon about how people use various phrases for tone policing during a discussion.  I have discussed this in previous blogs, but not in his way. Individuals will make statements such as:  “You are not acting like a mature adult.  You have too much anger and you need to remain calm so that we can discuss this rationally etc .”  He refers to tone policing as a “silencing Tactic.”  It is true.  When a person raises their voice to another individual, a reaction ensues.  Often if they are loud they will emotionally force the other person to be quiet.  Rather than allow them to speak, they literally shut them down.  There are, however, people who do not tolerate this type of behavior, and instead raise their voice to be even louder.  In Mr. Hugs’ cartoons, he stated that “people distant themselves emotionally, along with their fears, anger or frustration in order to be heard.”  There was a second article with a video in which Jonathan Scott expressed his admiration for the women’s marches held last week-end.  As a celebrity in both Canada and the United States, he wanted people to know that he supported the women.  Instead, he was instantly cyber bullied.  A form of tone policing via the internet.  Everyone is allowed their opinions, and if famous people choose to express theirs, they shouldn’t be bullied or tone policed.  Our children cannot learn if they are unable to see all points of view.  It is the only way they learn and form their own thoughts, ideas and opinions.  In the Good Gus Series, there definitely was no tone policing.  The series is still available exclusively on Kindle worldwide.  If family members are using tone policing tactics on you while you handle legal affairs, voice your opinion by reading important information in “Misplaced Trust” which is available on Kindle, Nook, Apple and several popular e-book websites.