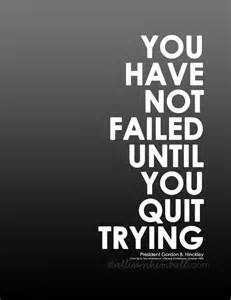 Everyone is always trying to do their best, solve their problems and live a better life. Sadly, though, sometimes trying just isn’t good enough.  As parents, when we have confronted our children about better grades in school or college, the majority of times the answer we hear is that they are trying.  Of course, the parents’ immediate response is one of the following:  “Try harder, That’s not good enough, etc.”  We all put forth our best effort, yet there are individuals who claim they are really trying to do their best, but the truth is they aren’t.  They make excuses, come up with absurd reasons, and often succeed in getting away with whatever they are not doing.  For example, a person is stopped by the police because they were speeding.  One of the first questions the police ask is, “Do you know how fast you were going?”  Obviously, it’s a trick question.  Of course you know but if you admit it you are sunk.  Whether they have radar or you were caught on one of those electronic speed markers, you are still caught.  Then come the excuses.  It can range from almost anything such as “I didn’t know, I wasn’t paying attention, Another driver was harassing me and I was trying to get away,” to just about anything that may come to mind.   Basically, in their efforts to avoid a ticket, just by trying to wiggle out of the ticket, they end up with a bigger mess.  In many of the children’s’ shows, there is someone always trying something.  It can be an animal looking for more treats, a character angling for presents, major efforts to not do chores or homework, to watching a younger sibling.  It never matters.  What is also almost annoying are individuals who claim they are trying to help another person.  For example, a family has an older adult who is not well.  A relative may live near by and claim that they are looking after the senior.  The reality is not that at all but rather to see what they can change in the person’s will or trust to have them be the sole beneficiary.  The worst part of that is the pretending to be so kind when they are really just a thief.  If you have never heard of such behavior, please consider reading “Misplaced Trust” which is on all popular e-book websites.  In the Good Gus Series, the citizens rally around when one of their own has a problem.  Rather than talk about trying, they do whatever is necessary to solve the issue.  The Christmas book, “The Special Gift” along with four others from the series are now available elusively on Kindle worldwide.