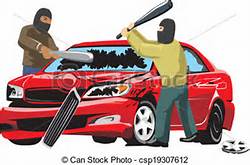 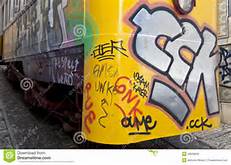 In every country in the world, vandalism exists.  Yesterday, my truck was a random victim of vandalism while in a secure car park.  Someone ripped an emblem from a Jaguar and thrust it through the passenger window.  Fortunately, no one was in it at the time.  It sounds foolish to say that no one was in the vehicle  but often a family member takes a break  and sometimes a short nap laying on the seat.  Random vandalism is an everyday occurance around the globe.  In the United States, spray paint is under lock and key in all stores.  Yet, they seem to find the paint and markings are everywhere.  In Italy, the markings for spray painting are focused on political issues.  In other countries, the ugliness is generally marking territories for gangs.  So, if a person from a rival or even someone wearing the wrong colors stumbles into their territory, there are severe consequences.  The worst part about vandalism is that the insurance companies, in general, do pay for these acts which in turn raises the cost of insurance premiums.  As it is, the costs are high and the destruction of property only exacerbates the situation.  Have you ever wondered why vandalism occurs?  The reasons are many.  It can occur, primarily in high schools, because of peer pressure.  The majority of vandals are young men.  They think it is funny and often do it on a dare.  There are others who use vandalism to express hatred for other races and/or religions.  The people who perform these acts are basically shallow. They have little or no aspirations in life other than money, material possessions and even glamour.  They also have strong jealousy from anyone who is successful financially, materially and basically happy.  So once again, people who feel inadequate or inferior towards their fellow occupants of the earth, believe they have the right to destroy property, without regard to the innocent victims who end up paying for their moment of excitement or temporary ego boost.  In the Good Gus Series vandalism did not exist.  The books are exclusively available on Kindle worldwide.  “Misplaced Trust” is also available on Kindle, Nook, Apple and several popular e-book websites.