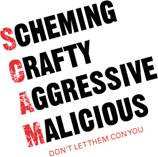 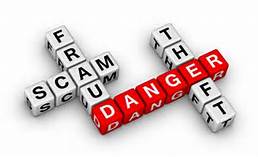 Scams are everywhere and I was almost a victim of one yesterday.  I received a phone call from a person claiming to be a representative from the Internal Revenue Service.  He gave his name and started telling me that I had fraudulently filed returns in 2011, 2012, and 2013.  At first I couldn’t believe that the IRS was calling me.  I use a certified IRS Agent who is also an attorney for all of my taxes.  I couldn’t understand this unless somehow the files had been hacked at the IRS.  He continued on and insisted that I had to listen to the charges.  I asked if I could call my attorney and he said that if I hung up on him for any reason that the police would be at my door in thirty minutes and I would not only be arrested but they would confiscate any of my possessions.  He went on to say that I would lose any and all passports I might have along with all of my accounts being frozen.  Needless to say, I was stunned.  I asked for his badge number and then while I was on the line with him I texted Miss Patty from the Good Gus Series,and told her it was urgent. Most of the characters in the series are named after people I know.  While he read the charges to me, Miss Patty called my attorney who said it was a scam.  He said they would have called him first.  The scam artist was so good that he actually  had convinced me I was going to be arrested. While I was waiting for Miss Patty, he told me I had to pay the full amount today or I would be arrested.  I asked why I didn’t receive any notice and he claimed I wasn’t home to accept the letter.  I began to become suspicious as nothing was adding up.   I demanded that I be allowed to speak to my attorney.  He kept insisting that if I hung up I would be arrested in thirty  minutes.    Finally, I hung up.  He called me back three more times before I blocked his call.  Apparently, this is a scam that is perpetrated on unsuspecting individuals.  The fear of possibly being arrested and going to jail, stuns the brain and fright takes over.  Needless to say, the thirty minutes came and went and there never were any police or IRS agents at my door.  These scams encompass a variety of countries and include such things as you have won the lottery, but you can’t receive the money without paying taxes.  That particular scam utilizes greed and people will give their credit card only to be cleaned out and never receive any money. There is also the scam of paying to apply for jobs, paying a high rate for a credit report, application fees when it’s impossible that you will ever be accepted which could include a mortgage and college.  There were scams in the old west, but not in the Good Gus Series.  If any one of the heirs of the will or trust you are handling tries to scam you out of money, don’t believe them.  Visit maecharlesbooks.com and read “Misplaced Trust.”  It may shock you how people behave when they are trying to cheat their siblings and other beneficiaries out of their inheritance. (books available on Kindle)