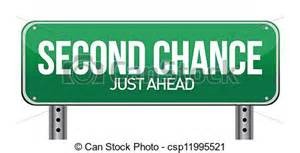 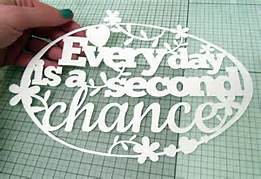 Almost everyone deserves a second chance.  Sadly, however, it doesn’t always happen.  If children are playing a ball game, baseball, basketball, soccer, football, or hockey and they miss scoring a point, there isn’t a second chance.  It’s always sad when a child misses the point at the final moments and the other team wins.  They literally spend days going over their missed point and wishing they had a second chance.  When newspapers, or the internet report a story inaccurately, they do have a second chance to print a retraction and make it right.  Often if their source gave them the wrong data, then not only do they look bad, but the source does as well.  In cases such as those, the source probably will never be used again and will not have a second chance.  Obviously, people who are guilty of violent crimes do not deserve a second chance.  In the workplace, when a person makes a mistake, or has an accident, they may be given a second chance.  If the mistake is really terrible, then the boss, owner or manager will make them redundant.  They will have no option.  If the error cost a great deal of money, the insurance will handle it, but the premiums will then increase and it will not make anyone in charge happy.  Many married people, or individuals in a civil union or partnership, will give their mate a second chance if they do something wrong.  It could be a onetime affair, blowing the budget on something they couldn’t afford, or even turn to a type of addiction such as drugs, alcohol or gambling.  If a partner chooses to forgive and give a second chance, the probability is that the relationship will last and not fail unless it’s an addiction.  Fighting an addiction is just that.  It is a battle.  Sometimes the person can’t beat it and other times they try everything to turn their lives around.  The best part about the Good Gus Series is that none of the stories have adult problems.  The stories were written for the young reader to enjoy and learn simple lessons about kindness and doing the right thing.  If you need a second chance with your finances, visit maecharlesbooks.com and click on the Money Manager.  The system will give you that second chance.