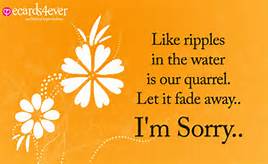 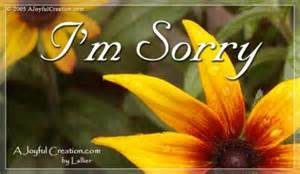 Many individuals find it difficult to say I’m sorry.  They can easily say it to a person who is going through a rough time or has lost a loved one.  However, people find it difficult to say I’m sorry when they have said terrible things or harmed another person in some way.  It’s only two words, yet if people used it more and truly meant it, there would probably less problems not only within their families, in their relationships and even in life.  Many individuals have found that working with other people who are never wrong, at least in their mind, and when actually called on it, they not only refuse to admit they are wrong, but they don’t apologize either.  For example, a woman who works in a legal office prepared some paperwork for the sales representative to deliver.  The attorney had checked the work, but the rep decided she had made a mistake.  He insisted she correct it.  She verified that the work and wording on the document was one hundred percent accurate.  She gave him a ring to let him know and his phone went to voicemail.  He still wasn’t convinced so he actually called the client himself even though she expressly stated that she had the proof that the work was accurate.  Finally, he asked for the document again as he had crossed out what he felt was wrong.  She resent it.  Did he apologize or say, “I’m sorry?”  You can guess the answer. He has worked with her for years and should have recognized that her work was correct about ninety nine percent of the time.  Her response after I commented that he should have at least admitted he was wrong was, “It goes with the territory.”  This wasn’t an isolated incident.  The same situation probably occurs in many offices anywhere in the world.  It really boils down to good manners and common courtesy.  Within families arguments ensue.  Rather than allow them to prolong, as many do, it is easier to say, “I’m sorry.  Let’s work this out.”  Often people allow their personal feelings to overshadow what they know is the right thing to do.  Pride also stands in the way of uttering a simple apology and trying to resolve situations.  In the Good Gus Series, the first page of every book says the exact few sentences.  One of the most important lines that I thought children should remember is the following.  It refers to Sheriff Gus.  “He is a good sheriff because he always does the right thing.”  The lessons from the stories are presented so that the young reader learns and enjoys the plot.  If you are hoping for the heirs or beneficiaries of the trust or will you are working on to say even just once, “I’m sorry,”  don’t hold your breath.  Instead read “Misplaced Trust” at maecharlesbooks.com.  (books available on Kindle)