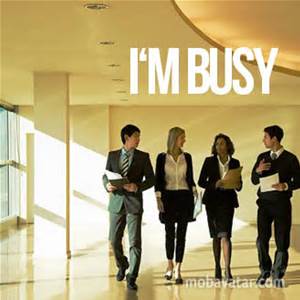 When a person tells you they are busy, what do they really mean?  Often what it really means is that whatever you are asking from them, they are saying no.  Some individuals are polite about it and others are not.  Occasionally, they give a reason and it may or may not sound legitimate.  Many people disguise what they do at work.  They always look busy, but they really aren’t.  I am sure you have worked with individuals like that.  Many years ago, I was part of a small team that took over a legal business.  The woman running the company was doing her best.  Her father had originally started the business and she worked at it with him until he passed.  Then she began hiring individuals who basically said whatever she wanted to hear.  They were all doing busy work.  When they were terminated, one person had a large desk drawer full of menus from local restaurants and fast food places.  No wonder they didn’t have time to work.  Their fake busy work showed on their computers in the form of video games, personal shopping, dating sites, and more.  At another company, there was a woman who was really good at documenting her busy work.  So much so that since she was responsible for repeat sales, the numbers looked real but the income bared the truth.  What was worse, was one of the consulting team walked into her office when she had he back to the door, and she  saw her watching porn. Everyone is busy every day as we all have responsibilities.  There are those people who have a messy home, messy car, never appear with pressed clothes and yet claim to always be busy.  What are they doing all day? How often does a friend or relative call and just start chatting without asking if you are busy?  There are many individuals who work at home, and consideration should be given by callers as the person may truly be busy working.  When my children were young, I worked at home.  You have no idea how many parents asked to leave their children with me even though they knew full well that I worked at home.  Employees even worked in a beautiful office above my garage.  It was shocking that these women felt that I had free time because I was at home.  None of them worked either in or outside of home.  In the Good Gus Series, everyone was busy but it was to exist and survival.  If the heirs of a trust or will feel that your time isn’t valuable and that you are not really busy, let them know that handling an estate is time consuming.  Please visit maecharlesbooks.com and read “Misplaced Trust.” It may give you a few snappy comebacks when the heirs are inconsiderate towards you and feel that you aren’t really that busy.