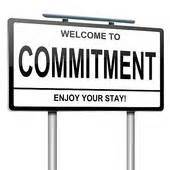 Everyone has commitments. It isn’t always easy for people to live up to their commitments. Sometimes it is downright impossible. For example, a man or a woman who are in a relationship or married to a person who is bi-polar.  They never know how the other person is going to react to even the most insignificant event, conversation or even the weather.  Many years ago, a friend of mine assisted a woman whose father had committed suicide.  It was a terrible time and the woman, who was a co-worker fell apart.  My friend assisted her to return to help her mother.  She was up until three in the mooring setting up flights and making arrangements for her.  The woman took a month off from work and when she returned, it was evident that her bi-polar was on overdrive.  For an insignificant reason, she began ranting and screaming in the office at my friend.  The President of the company came out of her office because she was so loud.  She admonished the woman and told her that she had a month off with pay and that her attitude was not welcome.  She further stated she had twenty-fours hours to turn herself around, or don’t bother returning to work as there would no longer be a job for her.  Of course, the woman never apologized to the workmate.  Instead, she saved all of her insanity for when the president wasn’t in the office.  Obviously, my friend quit as it was an unhealthy work environment.  She had promised the president that she would remain in her position for one year but it became impossible.  She regretted breaking her commitment but she had no choice.  The same is true in marriages.  Often, besides individuals changing as they move through phases of their lives, the commitments they made sometimes have to be broken as what was once a wonderful relationship changed to negativity and unhappiness.  It is important when we make commitments that we are sure that we can live up to them and keep them.  In the Good Gus Series, “The Special Gift,” which is the Christmas book, Ray commits to an orphan.  It is a wonderful story particularly for Christmas in July!  If you find your commitments for handling the will or trust are wearing you down, take heart and visit maecharlesbooks.com and read “Misplaced Trust.”  It will brighten your day. (books available on Kindle)