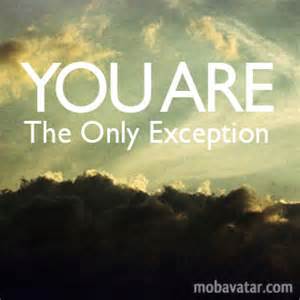 Everyone believes off and on that there is an exception to everything.  However,frequently they are wrong.  Women meet men and men meet women and think that  they are the exception to everyone else and have a perfect match.  If that was true, then the divorce rate around the world would be extremely low.  Yet, many couples feel that way and think their relationship is like no other.  Then, down the road, possibly after children, they realize they weren’t the exception and become another statistic.  The same is true in the workplace.  The management hires a person whom they guarantee to be the exception and will lead the company to newer, greater and better times.  Yet, often, it is just the same old type of person and nothing really changes.  Anyone who watches CNBC as they discuss a new President or CEO for a company understands that.  The new hire will send the profits soaring so everyone should jump on board and buy that stock immediately.  Yet, in many cases, the companies go from bad to worse.  Yes, there are exceptions.  However, if you watch the turnover ratio to success, you will see that the exception doesn’t really exist.  It’s the same old business as usual with modifications that are imperceptible so that even after they present a great deal of hype, it still doesn’t matter.  Nothing really changes yet they make it sound like it is a new and fabulous way of doing business.  People often say when they are having an argument or fight many things that they regret.  They come up with a variety of excuses and claim that what they said was an exception for whatever reason they may have given.  Then, when it occurs again, or even a third time, their theory is gone because it isn’t an exception.  It is how they really feel and the words they say they meant.  It wasn’t an accident, or whatever excuse they may give.  It truly gets old to hear individuals constantly say that it is an exception when the reality says otherwise.  It’s sad that people hope that they are unique or in special circumstances when facing the truth about who they are, what their life is really like, or even the reality of a bad situation or relationship.  Now, when you read the Good Gus Series, you know that they are  an exception to today’s books about aliens, fairies, violence and even hidden political agendas.  If each beneficiary tells you they are the exception and deserve more while you struggle handling that will or trust, don’t listen them.  Instead read “Misplaced Trust” at maecharlesbooks.com. (books available on Kindle)