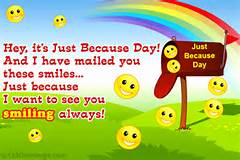 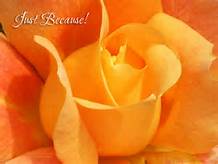 Just because are two words we hated as a child and are not enamored when we hear the words as adults.  The words were a favorite of many parents.  They would often answer  why questions with “Just because.”  I always hated it.  Adults do it today which is surprising.  There are a few women who have told me that when a man broke up with them they never gave a definitive answer.  Their response, which I thought was rude and immature was, “Just because.”  The ladies had a very difficult time getting past the break up as they felt that somehow they did some something wrong or were a failure as a person.  It’s not really that.  It’s more that they either found someone else, they are selfish, rude and possibly narcissistic.  Either way, it is wrong and quite hurtful.  Lately, I have noticed in a friend of mine’s mail, that letters arrive that were written just because.  It’s the only way to describe it.  My friend received a notice from a law firm in another state claiming he had not paid his fine for a ticket.  The ticket was last year and it was controversial as the weather was icy and the road was slick.  He had been pulled over for speeding which was really a joke as it was truly impossible to go over the speed limit let alone actually do it.  It was a basic speed trap that occurs in many states in the U.S.  He hired an attorney who defended him to prohibition for six months and it would be expunged from his record.  He also had to pay a fine.  He followed the rules and did everything in a timely manner.  Now that the probation is over and his record is clean, he received a letter from a law firm in a different state claiming he had never paid his fine.  Fortunately, he kept a file and has his receipt.  Now, however, he has to deal with this situation.  Why did they do it?  Choose any reason you want: they felt like it; they want to increase their profits and cash flow, or just because.  In the Good Gus Series, when the children make mistakes or do something wrong, they are told the reason why and what their punishment will be.  Just because the beneficiaries are annoying and aggravating to you as the manager of a will or trust, don’t let them affect you.  Visit maecharlesbooks.com and read “Misplaced Trust.”  There will be tips on how to handle those charming people. (books available on Kindle)