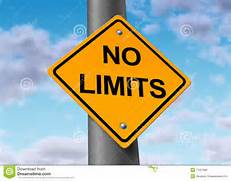 There are limits on what any person can endure. Lately, all the violence in the world is pushing the limits of many individuals. It’s not an easy task.  There are limits placed on us in everyday life.  It depends on how much and how far they go before people react.  When we were children we grew up with all types of rules and restrictions.  They were placed on us so we would understand just how far we could and could not go.  As teens we all probably pushed the limits placed on us as far as we thought we could take them.  Then, once the consequences rolled in, the behavior changed.  As parents we do the same today.  My little granddaughter is at the age where temper tempers are a new and interesting concept.  She somehow thinks if she fake cries or yells loud enough I will give her what she wants.  My response is, “You may do all this but my answer is still no.”  She has learned that when I say no, it is a definite.  That is how we all learn.  As adults, however, the limits are much less and therefore, individuals will push them sometimes almost too far.  The latest violence in the United States and France just prove the persons committing these acts had absolutely no perception of limits.  Do you ever wonder what happens to an individual’s brain when you see that they realize that they believe they can do anything without repercussions or consequences?  In daily life, there are some people who have so much on their plate that you wonder how they do it and when will their lives turn around.  Even if they reach the absolute limit and don’t think they can go any further, often they do by sheer willpower and strength.  They are the individuals who continue to have hope in spite of all odds.  Lately, there have been men wrongly convicted of crimes being released  from prison because of DNA evidence and discoveries of lying by witnesses for the prosecution.  All of these people must have held on to the belief that their innocence would finally prevail.  In the Good Gus Series, the children understand the limits placed on them.  They don’t always follow them but then they learn the consequences of their actions.  If the beneficiaries of the trust or will you are administering have pushed you to the limits of your patience, remain calm and read “Misplaced Trust” at maecharlesbooks.com.  (books available on Kindle)