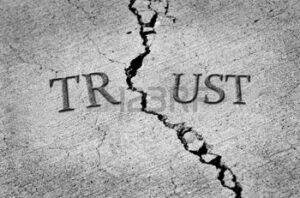 Lying and cheating seems to come easy to some people. When you think about it, it’s an everyday occurance. When I wrote “Misplaced Trust” one of the major points was to make the readers aware that once they are no longer in this world, that being prepared and what could happen to their wishes might be ignored, destroyed, or worse that their lying and cheating relatives would end up with everything they worked their whole lives that was to be passed on to their family. It’s interesting reading according to many individuals who have read it. Let me give you an example. This is about a case that is not in my book as its a newer one. A husband and wife moved from Europe to the United States. They worked hard their entire lives. The believed in the “American Way.” However, their children, a boy and a girl, were born in the U.S. and did learn the “American Way.” Both parents believed that they instilled the old fashion ways of their former country.  They children grew up and the son remained at home.  The dad passed and eventually so did the mum.  Their estate plan, trust and will each stated that their worldly possessions were to be divided equally between the two children.  The parents felt that since the first born was the son, that he should be in charge.  Big mistake! The son took his time  settling the estate.  He began giving excuses as to why everything was taking so long.  He had suspected that his sister was ill.  She had a son, but he didn’t marry or have any children.  As soon as he found out his sister was extremely ill and was dying, he set up a plan to cheat her son, his nephew,  out of her share.  You wouldn’t mind, but the son had inherited an investment account worth well over one million U.S. dollars.  You would think that alone was enough money, but apparently not for him.  His greed was unbelievable.  When his sister figured out what he was trying to do, she contacted an attorney to make sure her son would receive what her parents had wanted her to receive.  Fortunately, she hired an attorney who had children and he clearly understood and could see what her brother was doing.  In the end, she passed, but the attorney prevailed for her son.  What is even more important about this story, is that the sister’s attorney forced her brother to pay all attorney fees for him so that her son inherited everything.  Needless to say, the brother was livid, but his lying and cheating ways were stopped.  In the Good Gus Series, no one has this type of issue.  Naturally, there was lying and cheating, in the old west, but not in the Series.  For young readers, positive reinforcement is more important.  I hope I have peaked your interest in “Misplaced Trust” located at maecharlesbooks.com or on Kindle.