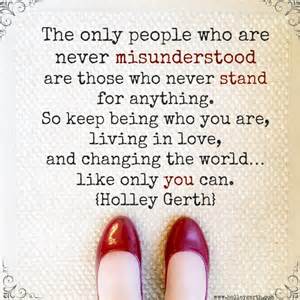 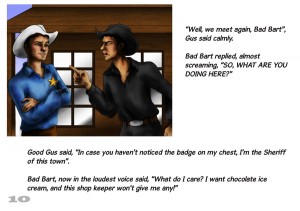 Often individuals are misunderstood. They may make a statement that somehow is taken the wrong way. There have been countless movies about misunderstood people. If a person’s says you don’t understand, they may just be mistaken.  Whatever anyone says is always open to interpretation.  In general, good communication is the key to making sure anyone is not misunderstood.  Yet, it is a fact of life.  It’s not so much as being misunderstood, it is more like the individual’s interpretation of what has been said.  The old experiment of telling one person one thing and then having them tell six or eight other people is still true today.  By the time they reach the last person, each individual has interpreted what was said.  The ending words are not even close to the beginning words.  It is also an line married people use when they want to obtain sympathy from a person and begin a relationship on the side.  Those words have been used in so many books, TV shows and movies it is unbelievable.  Anyone who hears that line should immediately run the other way.  Teenagers believe that they are misunderstood by their parents.  They forget that their parents were once teenagers.  Sure times have changed, but life is still the same.  There is more electronics and more violence.  However, people are still people.  Boys want to date and girls want to date.  Dancing styles have changed but it is still dancing.  The old saying history repeats itself is true.  Teens do many of the exact same things their parents did and yet they were misunderstood if you asked them.  In the workplace, being misunderstood leads to a negative work environment.  Often, employees recognize fairly quickly what is expected of them.  They put forth their best efforts but if they have an uncaring negative boss, they will rapidly look for another position to escape their situation.  The manager or boss can say to the upper management that he or she is misunderstood by the underlings, but if they presented everything in a proper way, then it is them, not the employees.  In the Good Gus Series, the only person who feels misunderstood is Bart Bart.  However, Sheriff Gus quickly turns the situation around.  If you feel misunderstood by the heirs while working towards giving them their gifts, visit maecharlesbooks.com and read “Misplaced Trust.” (Books available on Kindle)