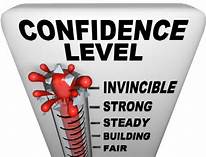 Being over confident can be positive or negative depending upon the circumstances.  The over confident person tends to be so sure everything will go their way, that often it actually happens.  However, if they believe they will always be successful in every endeavor, they could be in for a rude awakening.  In a court case, an over confident attorney may be  positive that he or she will win the case.  However, there could be new evidence or a surprise witness at the last moment that could completely reverse the plan the attorney had in place to win the case.  It is particularly apparent in the world of sports.  Mohammed Ali was extremely over confident.  However, he always won.  He was an exception.  There are teams that believe they are superior to their opponents and because they are confident they will win, they often do, but not every time.  When they lose, they take it very hard as they never even imagined that they would fail.  As parents we try to make our children over confident.  We want them to believe in themselves and become successful in life.  However, some parents who go overboard with their child or children end up with terrible losers.  Some have temper tantrums which continue into adulthood.  Others, take their failures out on anyone who is available.  In the Good Gus Series, Book fifteen, “Girls Rule,” there is a horse  race around the Pecos River the last day of the town Fair.  They were emulating the State Fair held each year in Dallas.  It was the boys against the girls.  The boys, J.C. and Bronco,  were over confident.  They were sure they were the best riders in and around Pecos.  The girls, Heather and Haley,  however, really worked hard with Joe Kelly, Haley’s dad.  They worked with him every day before the big race.  He taught them maneuvers, and how to hold back so their horses wouldn’t be too tired.  Of course, the girls won and the boys sulked.  It’s a great lesson for young children. (books available on Kindle) If you are looking to expand your reading into something different, please consider “Misplaced Trust” and learn how greed, stealing, and  over confident heirs do unspeakable things all for the sake of money. (books available at maecharlesbooks.com, Kindle, Apple I-Books, Nook, 24 Symbol and several other excellent e-book websites.