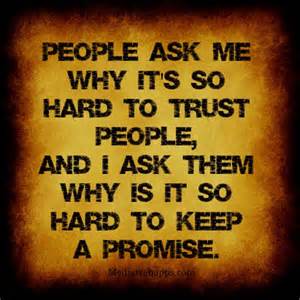 Making promises is wonderful. However, keeping them is another matter.  With elections around the world, promises are just about all you hear from the candidates for future elected offices.  Yet, how many of the promises that they make are actually kept.  It would take a person devoting their entire work hours and then some to see which of the promises they made were kept and how many were broken.  One of the keys, though, is that they tend to keep their word on the really big pledges so that they can utilize the publicity for their next election.  It has been said that once a person is elected into office, they are immediately planning their next election even if it is several years away.  Of course,  originally being elected to be a job that individuals were proud of and their goal really was to make the world a better place.  Now, it is a highly lucrative business and is all about the money.  In the United States, even if they only serve one term, their retirement and benefits give them a much easier financial life.  I am not saying all politicians are bad, but look at what is at stake.  There are campaign funds, contributions, fund raisers all for the purpose of being in office.  Running on one’s merits is there but it is overshadowed by the money.  If there wasn’t any money involved, how many people do you think would volunteer to work as an elected official for the good of the community?  Not many I would imagine!  When people get married they make a commitment and promises.  Yet with the high rate of divorce, those both seem meaningless.  Relationships start out with everything going smoothly.  Somewhere along the way, things begin to unravel and fall apart.  People who really love each other will withstand whatever happens.  The people who only married for money, convenience, it was time due to their age, or any other reason that comes to mind, end up in divorce court.  When they said “I do,” they meant it.  However, when times became too difficult, their promises no longer mattered.  There are a few stories in the Good Gus Series that include promises by characters.  The best part for the young reader is that they were kept.  It shows them the value of keeping their word.  (books available on Kindle) If you are seeking different reading material, look no further.  “Misplaced Trust” offers intrigue, greed, hidden motivations for behavior and so much more.  So if you have promised yourself you would read more then visit maecharlesbooks.com, , Apple I-Books, 24 Symbol, Nook, Kindle and other quality e-book sites and begin your adventure.