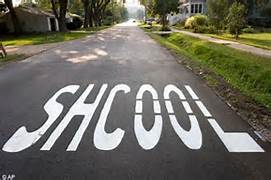 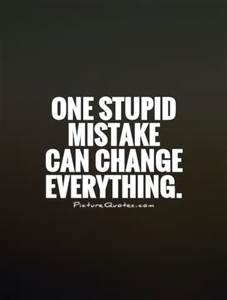 When people aren’t thinking clearly, they make stupid mistakes. For example, a person is seriously in debt. They can’t pay their bills, meet any of their financial obligations, so what to they do? They make stupid mistakes by making the wrong decisions. They may think that if they take their last bit of money and bet on a sure thing be it horses, dogs, a fight, anything, that they will win and everything will be fine. Of course, once they lose, their circumstances becomes so bad, that they compound their situation into even more stupid mistakes.  When people are desperate, they do not think clearly.  Rather than calm themselves down,  possibly meditate, or simply regain control of their brain, they react by whatever emotional thoughts run through their brains at the time.  Then when they proceed their life becomes a further nightmare.  To avoid stupid mistakes, people who are having a terrible time need to try to seek advice from individuals they trust.  Hoping to pawn items to raise cash is not always a wise choice.  The pawnbroker is looking to make a large profit and is really not interested in the sellers’ problems.  Therefore, if they took the time to sell an item to raise money, they would be making the better decision.  Often people believe that every thing they do is wrong and that they continue to make stupid mistakes.  How many times have you seen movies where two people get drunk and marry particularly in Las Vegas?  There was even an episode on the TV show “Friends.” Once the couples realized their stupid mistakes, they either had it annulled or divorced all which cost them quite a bit more money.  There are times when people make stupid mistakes, but recognize them and rather than keep doing it they correct their errors and move on.  Young adults generally make stupid mistakes.  They usually regret them once they are caught.  People who commit crimes on a lark are really foolish.  Their stupid mistakes can cost them not only money, their job, possibly  their education, and even be forced to spent time incarcerated.  In the Good Gus Series, the children make stupid mistakes but they learn from them.  Don’t allow stupid mistakes to affect your finances.  Check out maecharlesbooks.com and view the Money Manager.