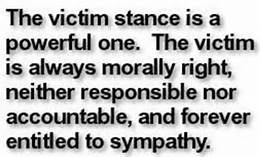 There are people in this world that have the victim mentality. They are not the person who has been the innocent victim of a war, a violent crime, or even mean spirited people. They are people who perceive themselves as always being the injured party.  It sounds ludicrous, but you may have met one or two people who have the victim mentality.  What will drive anyone crazy, is no matter what you say to them they somehow are the victim of you, their surroundings, or whatever the circumstances may be.  It even occurs in the workplace.  I worked with a woman who had the victim mentality.  She became extremely friendly with the male boss, and before you knew it, the workmates she didn’t like were either made redundant or quit on their own.  How can it happen in the workplace you may be wondering.  Simple, a person will claim that one or two other co-workers find fault with her and are basically picking on her.  She also took a basic situation, added just enough fabrication to the truth, and before you knew it, her victim mentality had won  and the person was let go.  It’s difficult to comprehend why their minds work that way, but they do.  There are men who have the victim mentality.  They do use it to their advantage.  They make their partner feel guilty and make sure that they clearly understand that everything is their fault even though it is not.  They also use their victim mentality if they decide they no longer want their partner be it a relationship or a marriage.  For example, they go out of their way to make life miserable for their loved one until they reach the point that they can’t take it any more.   Then once they end the relationship or filed for divorce, they are once again a victim.  Any woman who meets a man who claims that other woman have been cruel and mean to him, need to clearly understand that that man has the victim mentality.  It is exactly the same if a man claims the same unfortunate treatment.  The victim mentality is acquired behavior.  The psychological term is a personality trait.  No matter what it is people can break out of it if they have the will power and learn a few techniques.It is also referred to as self pity.  A few articles I read said that it’s addictive and one of the most destructive  non-pharmaceutical narcotics a person can have.  It literally separates the individual from reality.  If you know someone like that, listen to their words carefully and try not to validate their victim mentality.  In the Good Gus Series, no one has the victim mentality.  Everyone thinks positively about life and their surroundings.  It gives children an excellent example.  If you feel that you have the victim mentality with your finances, visit maecharlesbooks.com and peruse the Money Manager.  It may be exactly what you need.