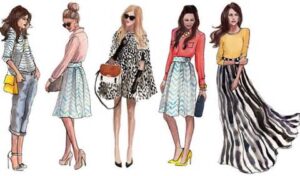 When you shop do you feel you have a sense of fashion? Many people believe they do, but the fashion shows on the TV indicate otherwise. Yesterday, while I was driving, I saw two young men who I am sure felt they were at the height of fashion.  They were wearing jeans buckled below their backside.  Seriously, what would make anyone think that was attractive?  What happened  to a little mystery? In Florida, laws were passed prohibiting that type of dress in public.  They were one of the first states to ban it.  Then there are the people who wear baseball style caps backwards so that the bill is covering the back of the head and not the eyes from the sun or part of the face from rain.  It was the in way to wear a cap for so long that stores specializing in caps for sports teams, countries, etc. popped up around the globe.  Now that the popularity has waned, there are very few cap stores left.  Of course, there was the one size fits all craze;  that was unbelievable.  It actually started when a manufacturer of clothing had tee shirts made by a foreign country and they were cut the wrong size. So rather than lose the money, he started a new fashion fad; the big baggy look, one size fits all!  It caught on and while the emerging nations were bidding and receiving contracts to manufacture American clothing, along the way they began to learn how to adjust for sizes and increase their overall economies.  Fashion is in the eyes of the beholder.  However, the various manufacturing companies and designers tell us what our eyes should see and how appealing the clothes are so that we all purchase them.  The fashion industry is like the car industry used to be.  They design new products and they look similar for a few years and then a dramatic change.  For the auto manufacturers, it meant new cars every few years.  For the fashion industry, it means new clothes for every season.  Although, they do, particularly for the female wardrobe, let the shoes be in style for a year or two before changes.  The fashion world is a tough business.  The competition is fierce and the designers compete quite strongly for the manufacturers to copy their designs.  It has become very popular for famous people, and celebrities to offer their own line of clothing for the lower income buyer.  In the Good Gus Series, there was no fashion.  It was jeans, boots and cotton shirts.  Even the hats look the same today as they did back in the late 1800’s.  If your fashion sense has made your credit cards over due, consider the Money Manager at maecharlesbooks.com.