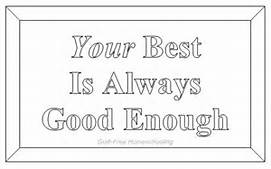 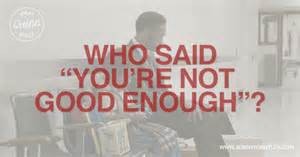 There are people in life who feel that they are not good enough. This could be  not good enough to be in a relationship with a person extremely attractive or wealthy; receive a promotion at their job, attain or reach the goals their family set for them, start a business, attend college, enter a contest, etc.  It’s really a self esteem issue that they feel they aren’t good enough.  There are so many movies where the parents set goals and have expectations for their young adult children that they feel pressured to meet and achieve those goals even when they don’t feel good enough.  It makes for great drama when the parent or parents find out that the daughter dropped out of school two semesters ago, or the son who assured his parents he finished tech school and his lack of experience is preventing him from obtaining a job, or worse, the people who outright tell you that you are simply not good enough.  It has happened to individuals applying for positions, which is really sad.  Even though the laws exist, I have know a few people who applied for positions that they seemed to be ideal for and yet during the interview they were told they weren’t good enough for the job.  It’s defeating to anyone looking for work.  It is also a huge power play on the part of the hiring person.  If a person is not really qualified for a job, it is far kinder to state their experience is less than they were hoping for.  Anything so that the applicant doesn’t give up.  Parents have high expectations for their children as they grow.  However, many times those goals that they have set are not the ones their child or children are seeking or even hoping for.  For example, a father expects his son to run the family business one day.  In reality, the son hates the job and the duties that go with it.  He should tell the dad but many son’s and even daughter’s are afraid to speak up.  They believe that the parent will not longer love or respect them.  In many cases, its true, but there are so many other parents who recognize that what they like and want or not necessarily what their child dreams about.  As parents, exposure to a variety of careers give the child the opportunity to see which jobs are appealing and which they know they will hate.  There are people around the world who followed in their parents footsteps in a business or a career and are miserable.  It’s better to talk it through and let the adult child decide what they may want to do in life even if the parents do not agree.  None of the stories in the Good Gus Series offer guidance for careers.  The readers are just too young to understand.