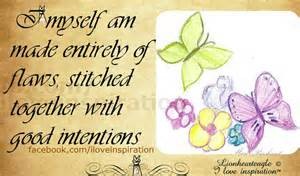 Most people have good intentions. They mean well in whatever they are doing. Its just that sometimes those good intentions have ulterior motives. I once worked in a small company that had less than ten employees. The manager hired a woman as his assistant who appeared to have good intentions whenever she spoke with any of the other employees or did anything. Rather than do her job in a timely manner she would spend her time when the manager was not in, telling people that he had told her to tell them various tasks, etc. Later when the manager would question specific employees as to why they did the work a certain way, they would reply that it was through his assistant and that she had told them to do the work in that particular manner. She would naturally deny it and claim that she told the employee the exact opposite. Over the course of a few months, she managed to either convince employees to quit or they were let go because of poor performance. All the while she was claiming her good intentions towards the people she had targeted to leave the company. I was not part of that group, and only reported to the owner. I never knew she did this until years later when I met a former workmate and she filled me in on the assistant’s good intentions. The assistant destroyed the company because her behavior forced the hard working good people to leave. The workmate and I also figured out that the reason the manager believed everything she said was because they had a personal relationship even though he was married. There are also individuals with good intentions in assisting people in need which works out most of the time. Volunteers have good intentions and their acts of kindness are seen every day by the people they help. It is very sad when these wonderful people are harmed because of conflicts in countries. The citizens of Pecos, Texas in the Good Gus Series all have good intentions.  They help each other as much as possible. I hope as Easter draws near you will consider a book from the good Gus Series for the child or children in your life.