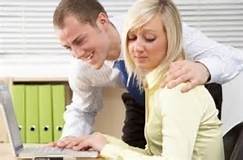 There are people who harass another person and sometimes that person doesn’t fully comprehend it. Certain types of personalities believe they can harass anyone without repercussions or consequences. There are laws in place around the globe for harassment in the workplace. Before the laws were passed, managers or bosses could harass an employee for a variety of reasons and never face any consequences. When I was younger, I was fired from my job because I refused to go on a date with my boss who was married. Two days later I was dismissed. He cited that my work was slow and poor quality. It took two people to replace me!  I just saw an old show yesterday where the woman was applying for jobs.  She went in person and at one of the interviews the prospective boss was chasing her around the desk.  That is the old stereotype of being harassed. There is also harassment as to how long it takes you to do a task or project. The supervisor can constantly disturb you pushing to you hurry along and it’s still harassment. As an employee you have a certain amount of time to complete the work and should be allowed to do so undisturbed.  Obviously discrimination is against the law everywhere.  However, that doesn’t stop managers if they don’t like a person, even if they are doing a good job, from harassing them in a secret effort to force them to quit.  You have probably seen that type of behavior in the workplace, in movies and on the TV.  It may be portrayed from a few different perspectives but not matter how its shown it is still a form of being harassed.  Have you noticed, particularly during the holiday season, how many emails you receive on a daily basis asking to buy a product?  Some of the companies literally harass you on a daily basis.  What is worse is that even if you unsubscribe, they continue to send the emails hoping you will change your mind.  Never ask for a quote for a service as you will be bombarded with emails and if they have your phone, a significant number of calls. They will harass you until you unsubscribe at least two or three times.  The only way to stop the calls is to block their numbers.  I understand they want to make a sale, but harassing a person is not the way to close the deal.  All the last minute ads are set to harass you into buying online, paying extra for shipping, or entice you to a store where you will probably purchase more than you had planned.  The Good Gus Series is still available for those last minute gifts for the child or children on your list.