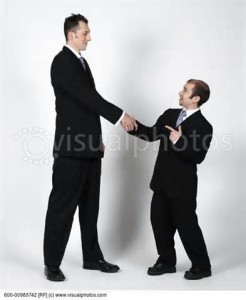 I saw an article about height recently. It said that taller people make more than shorter people. I might have discounted it except in was a CNN article. Apparently there have been numerous studies in which they refer to the “height premium” which basically stated that the taller you were the more money you made. A study conducted by the University of Pennsylvania found that if you took took two teenagers both applying for the same job that the teen with the greatest height received more pay. I find that unbelievable. What happened to treating people equally and the person who had the best work ethic receiving the higher pay? In the magazine ‘Psychology Today’ there was an article that stated that people automatically assumed if a person was tall they were more intelligent. I know I discuss appearance quite a bit in my blogs, but its only because people judge by that and not by who a person is, how well they perform on the job, whether they are kind to others and animals, etc. I found two articles which said that for every inch in height in the United States, the the individual earns an extra $789.00 per year. If you use a number of six inches taller for example, that person would earn an extra $4,734.00 in annual income. The article also said that the taller a person was the more respect they received. People should be respected regardless of their height. On the flip side, the taller you were the more likely according to medical studies, you would have health issues. If you research this further you will find that its not just height that gives people a higher income.  A Forbes article quoted Aaron Goluveia as saying that in addition to height, blondes, people who work out,  and women who wear makeup also received higher paychecks.  He cited studies by Procter & Gamble, Cleveland State University, and Yale.  In reality, its height discrimination.  There are so many issues in life that whether you are tall, short or average height shouldn’t make a difference.