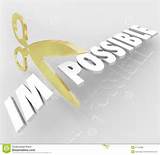 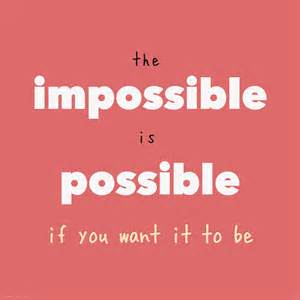 Sometimes life feels impossible. If you are having a bad day, everything just keeps to go wrong. There are people who think so negatively that when confronted with any type of obstacle they immediately say that they can’t do it; that its impossible. Yes there are events and things in life that are impossible. There is a new show on TV in the states entitled “The Grinder.” I just saw it for the first time and it appears that the story revolves around a dad and son with a family who are attorneys and another son who is single and known for a television series. In the series he played an attorney. It starts William Devane, Rob Lowe and Fred Savage. In the show I saw Rob Lowe was back living with his family and making his brother’s life difficult. Rob is more easy going but Fred, as a family man, is bordering on rigid. Rob helps them with a case and uses his acting skills for a case involving a man and woman who weren’t allowed to date at the company where they were both employed. They were fired so the law firm took on the case. Since the Dad, William Devane, loves having his son Rob Lowe around, he brought him along to the arbitration with the company. Naturally, Rob interfered and took some of his script lines and employed them to win the case. One of the things you discover about Rob is that on the series any time someone said something was impossible that was when he really went into action and made it happen. Of course, this also occurs in the story line. There are things in life that really are impossible often due to the laws of physics and or nature. However, when we were children, impossible really wasn’t in our vocabulary. We would do anything, try anything just to see if we could do it. Upon reaching adulthood, for many people that all changed. They became afraid of trying, taking risks whether large or small, and resigning themselves to the fact that whatever it was it was impossible for them.  Let me give a small example.  Today I had to drop my son at his job because his car battery was dead.  He didn’t want to jump it as it was really pouring rain.  So I dropped him did all my errands, dropped my purchases off and went back to his work.  I asked for him so I could make sure he had keys to my truck. The nice receptionist told me he couldn’t take a break and I told her that was fine I was going to walk home.  She said, “No you can’t.  Its too far.  That’s impossible.” I replied, “No it is not.  Before I had a car, I walked everywhere in Ireland and often lugging several sacs of groceries.” I told her it was only 2 miles or 3 km.  It really wasn’t that far and besides the rain had stopped and the sun was shinning.  In the Good Gus Series the children try a variety of things never once thinking that it was impossible.  Please consider any one of the books from the series as a gift for the child or children in your life.