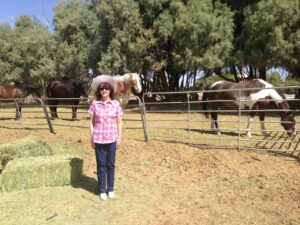 There are people around the globe who have intuition. There was an article today about a woman whose mother had strong intuition. She lived in the country and walked to a three room school house each day with her friends and her dog Lassie. One day as she was getting ready to walk home with her friends, their older siblings and classmates trailing behind her she saw her mother across the street in her car. The mother had called the school and had told them to tell her daughter not to walk home as she would be waiting for. As soon as the mum saw her daughter she stepped out of her car. The little girl waved at her mum and started to walk towards her. Suddenly at the moment the mum raced across the street and pushed the little girl away. She was hit by a speeding truck. Another mum saw the incident and scooped up the little girl and promptly returned her inside the school. The truck hit the mother but fortunately it was a gravel sandy type road. The mum was injured but survived. She was bruised from head to toe. Many mothers have intuition about their children. Once when I was living in Texas and my son was eleven he went off in the woods with his friend to play. Suddenly, while I was washing the dishes I saw in my mind that he had fallen into a creek. I made my daughter find a neighbor boy as he would know where the boys were playing. I jumped in the car with the two of them and the neighbor boy led me straight to the area. Sure enough we found him sitting in wet clothes trying to get dry in front of a small fire they had built.  There are shows with mediums and many years ago there was a man who claimed to have ESP.  He was dubbed the Amazing Kreskin.  He moved objects without his hands only his brain.  The mediums on the various TV shows appear to be able to speak to the dead.  A mother’s intuition, though, is by far the form of brain activity that has affected, possibly, many of our lives.  I know as a mother, logic also played a role not to mention I knew my children well, so even if I didn’t have intuition, I could manage to figure a few things out and still amaze them with my knowledge.  The entertainment in the old west was simple and fun.  Many of the stories in the Good Gus series include B-B-Q’s, birthdays, a horse race among the younger children, and simple games and sports.  I hope you will consider a book from the series for the special child or children on your Christmas list.