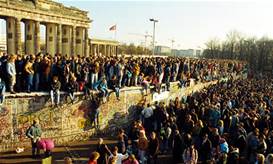 Walls are all around us. Many years ago, in Germany, the Berlin Wall was built  by the Russians to stop Germans from defecting to the West. Many did, however, in spite of of the walls. In November 1969, the walls were officially torn down. Those were walls to keep people both in and out. There are people who build walls around themselves. They don’t allow anyone to become close to them. In other words, they won’t let them in as the walls are there. Individuals who have walls tend to have a difficult time in life. They are afraid of anyone becoming too close; knowing what their true feelings are; what their opinions are on everything; and even their likes and dislikes. Everyone puts up a defense until they feel sure that they can trust whomever they are associating with. It is natural and a safe guard against the wrong type of individual. In the workplace, almost everyone has walls not only around their work area, but for them as human beings. They are justified in that if a workmate knows too much they could use it against that person.  Sadly, not everyone has morals and ethics.  In the daily grind at the office or the factory, it is necessary to be careful and protect oneself from gossips, rumor mongers, and evil people who either want a person’s position, or have them removed from the company.  I worked with a woman who did exactly that.  She pretened to everyone that she was interested in them and their problems.  Then little by little, she went behind their backs to the boss and they either quit or were let go.  She did it to three different women.  She also ruined the company, but she didn’t care.  She had her own walls that literally protected her from what she did to the other co-workers.  She was so awful to one man, that he ended up having a heart attack and passed away.  Yet, to this day, she continues on her merry way.  There are no walls in the Good Gus Series.  Although, in “Misplaced Trust” at maecharlesbooks.com,  many of the characters have walls and for good reason.