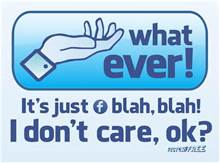 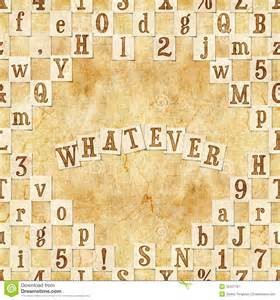 Whatever are words everyone hates to hear as a response. It became the word to say for teenagers a number of years ago. Right away you knew they were not listening and on top of that just didn’t care what you had to say. My daughter has used that word a few times and holding my patience with her was not easy.  It naturally led to an argument.  I am sure if you have or had teenagers, the same occurred.  When its all said and done, you walk away realizing that they don’t care what you say right up until they get into some type of trouble or have a problem that they cannot solve.When adults say “whatever” I feel that its worse. Its a verbal slap across the face; extremely disrespectful; and just plain rude. If someone says “whatever” in the work place, if you aren’t their supervisor or boss, you are stuck with an insolent co-worker. Seriously, an adult should have a decent vocabulary to respond appropriately rather then say “Whatever.” If it is a workmate, you are stuck working with him or her until you can find a new position or get promoted. Then, as the boss, if they answer that way you can show them the door. Whatever shows a complete lack of class, manners and obviously a limited vocabulary. I have seen younger people say “whatever” to their boss and because of rules at the company or laws couldn’t do a thing about it. If it occurs in a larger company, you can always transfer. However, a small company leaves no options particularly if they say it to you and no one else can hear. If you complain they can deny it and make you look like a trouble maker. What is worse is that if you complain and decide to look for another position, you may receive a poor reference.  In some countries its easier to say nothing for a reference so you won’t be sued.  My grandmother would have said that whatever was back talk.  I only back talked to her once.  She was a former farm girl and when her hand came across my face it really hurt.  Although, I never did it again.  I purposely did not have any of the children in the Good Gus Series speak harshly to their parents or any of the adults.  It was a subtle way to teach the reader respect.