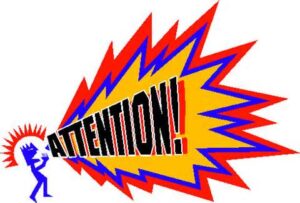 Pay attention! How many times have you heard those words? As children we heard it constantly. If it wasn’t our parents, it was our teachers, neighbors, well meaning relatives and even our friends. As children we were easily distracted, as children are today as well. When I was young it was television. Now, its television, phone texts, and tablets, Usually when we were told to pay attention, it was to learn something and our minds were off in another direction. I have heard individuals say pay attention to co-workers. It sounded immature and almost rude. If the employee isn’t paying attention, then assign the task to one who will. As a manager you can evaluate the people under you and utilize the individuals who really want to get ahead. Attention also comes in the form of “Look at me, notice me.” People will act foolishly, be loud and possibly obnoxious, dress to be noticed, speak in a manner with conversation that sounds impressive so they will be noticed and sometimes be rude to another person particularly a sales clerk who can’t really argue back without losing their job. There are people who make the rude comments, such as one particular person who posts criticizing me but I think mainly to get a rise out of me and more importantly be noticed with the attention to them and their on line business. 99.9% of the comments people leave are positive except for “Please notice me.” Answering him would only encourage more negative posts and give him the attention he obviously craves. There are also the criminals who want their fifteen minutes of fame. The military expect the service men and women to stand at attention.  They have 100% focus. In life, its nice to give positive attention to whomever needs it and deserves it. In this time, there are so many distractions. Our phones ring or buzz with a text, there are ads, commercials, flashing signs all trying to get our attention. Even as adults, its difficult to focus 100% of the time.  Thank you for reading my blogs.  I appreciate all your wonderful comments.