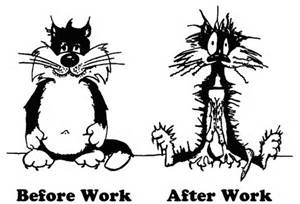 Do you wake up each day contemplating going to work at a bad job? Many people do. Statistics bear out that the average person in the world hates their job for a variety of reasons. Their bad job could be low pay, no chance for advancement and higher income, miserable boss, inconsiderate or lazy co-workers, ridiculous hours, no hope for decent raises in their checks. I have worked at a few bad jobs and it took a while to find better employment at a higher rate. When I first started working, it was part time while I was still in high school. I walked to and from work as there was no public transportation in my area and I didn’t own a car. The hours were after school, five varying days of the week. Being my first real experience I listened to all the other work mates believing just about everything they said. After all they were training me. A few of the women complained every day about their bad job. I didn’t understand why they didn’t find a better one. Eventually, when I realized that the minimum wage was all they could earn, their skills were minimal, that that was all it was, complaining. At the time, though, I suggested they look elsewhere for a more interesting position. Only one woman did. A couple of years later after I quit, those same ladies were still there and still complaining. I do know a young woman who is currently working at a bad job. However, this position is going to lead her to new and exciting possibilities in her career and a much higher income. She is learning all the skills necessary to make a name for herself and start her own business. For the moment, however, her boss is extremely difficult. She knows that it won’t be for long so its easier to endure. In many countries, what some people consider a bad job or possibly a low level position, is the same job that a handicapped person is grateful to work at each day. There are also individuals who are so unhappy with their employment, that they take it out on the customer.  You could go to the salon or hair cutters, only to have a cut and or style that is bad because they won’t even put in the effort to do the best they can.  Not only does it affect their personal income, but the owner of the shop and his or her livelihood. In the Disney show, “Girl Meets World” there is a character who worked in a diner.  She considered herself to be “just a waitress.”  She wanted more for her daughter.  However, her daughter’s friend’s mother purchased a cafe and put her in charge.  She did have the chance to take her skills and translate into a better position with a higher rate of pay.There have been other movies and TV shows that had as a main character, a person in a low level bad job.  Of course, being fantasy, they were able to rise above and achieve fame and fortune.  During recessions, people are grateful for any type of work as long as it has a paycheck attached to it.  Over the years, many people have started over, even at late ages and still achieved success.  In the Good Gus Series, everyone’s job is important as it benefits not only the individuals but their family and the town.